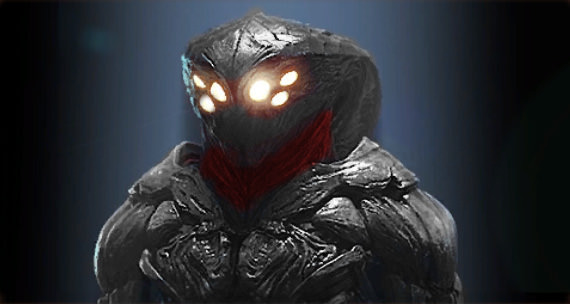 
Physical Appearance:
A 6'2ft Collector with dull, red muscles and a pale, white chitin exoskeleton. He has dimmly lit eyes that glowed a greenish-blue color. He wears a ceremonial, Prothean robe wrapped around his shoulders, back, and waist. His skull has two Cebrerus implants located on the backside of his chitin head. He's recently donned a stripped down version of a Prothean's set of armor.


Respected:
Adande Greene: "The Commander has been very accommodating towards me  despite our first encounter together. He also has received a fraction of my shard's cipher,  allowing him and me to communicate discreetly. I have him to thank for giving me a chance of redemption." - "Any Commander willing to allow a hated comrade to deliever a lession to a troublesome soldier can be respected in my book. It shows he knows when to allow someone to fix a problem that no one else has tried to fix without getting a little rough." - "Having seen only parts of my memories, My training and the time I spent fighting which nearly equaled to my entire life. He reminds me much of Captain Soljin. He was a good man and a better friend. But there's a end to everyone. I just hope that the Commander does not meet the same fate."


Flynt Thatcher: "He's a selfless human who's blinded by his own morals. Risking his life to save others because he cannot bear the thought of knowing that he could of saved someone when he chose not to. And see what has happened to him. He is a warrior that I will say is a pleasure to fight alongside. I hope that he does not lose his way." - "He's asked to show me a place back on Earth after the war, 'Ireland' they call it. He spoke highly of it. And he seems convinced that we will see this Cycle to the end. I admire his courage." - "I'm sorry."

Martin Banner: "He's the XO of his ship and he's very disciplined in his work. He offered me the opportunity to join the Alliance officially, and fight for the future of this cycle's races and the Empire. I will not fail him. I hope our future battles will be filled with glory."


Liked:
Victoria Morello: "Although I appreciate her efforts to help the crew understand my plight when I first came aboard  the vessel, I feel as though she's been caught up in treating me more as a 'pet' then the warrior I truly am.  She herself shows potential to be a soldier, but her attitude makes her appear more so as a child. I will help her see her potential, or I will mold her into it by force." - "She reminds me of the children that we had to train to fight during my cycle, they were naive, innocent. Unknowing of the true atrocities they would have to commit just to survive. And I had to take that and bury it into them.

Diego Stolarz: "The pilot of the ship that Greene commands. He's very fragile and easy to startle and seems  to also keep a very close eye on everything that happens on his ship. Considering his status as the pilot he must be very skilled in what he does. Although I wonder if he is a cunning warrior as well? I suppose only time will tell."

Sam Chevalier: "One of the Commander's soldiers. He is highly suspicious of me and shows great disgust towards what I am. He also refuses to cooperate as well, so much to walk away from his Commander when asked to allow me  to explain to him. I do not blame him, I do not deserve a fate such as the one that the Commander is giving me. I  betrayed my people, I deserve nothing more than a quick death." - "It seems that Chevalier is quite persistent in  avoiding talking with me. He is angered by the mention of merely training with him. I hope Banner made the right choice when he chose his service chief." - "A man with too much power for his own good, As soon as his power is diminished then he will break, and we will see how loyal he remains to his 'friends.'" - "After preforming a operation to save himself from his own biotics. I feel as though Chevalier has changed his views on things after this near-death experience. He might not be as powerful as before. But he's starting to improve his leadership capability. Something that we'll need should more of our warriors fall."

Popisia Victomus: "A turian we were sent to extract on Earth in their city of Houston. She is a biotic like Chevalier, one called a 'Cabal' in the Turian Hierarchy. It appears that Turian Biotics are fairly rare in the Hierarchy (As I should know given my...deals in the Terminus) and they are quite frowned upon by normal citizens, however. I believe she is a very powerful asset. And her attitude is more akin to the likes of me than most others. She would of made a fine Prothean."

The Reapers: "As far as my memory shard has shown me. I use to believe that our salvation as a Empire was to appease them, to join them in a effort to find out how to control them. We were wrong, I was wrong. And now that I am free. I will make sure to do what I can to redeem myself and avenge my people. The very ones I betrayed." - "I was denied a childhood because of the likes of these monsters. And many more will be denied that same right in this cycle."


Feared:
The Great Ones: "The Voice that gave me the strength to break from the tank. The Voice that silenced  the worms that the reapers burrowed into my head. Although I thank them for giving me a shot at redemption.  I fear as though they wield even more power than the Reapers. And their words haunt my very thoughts." "Shatter the binds and serve us." - "I have not felt their presence in a long time. But the feeling they give off...It reminds me of something from my cycle. And It terrifies me, Truly.


Irina Sykes: "She is the crew's doctor. And she does her part well. She keeps the crew in fighting condition. In my cycle, Our Empire valued these men and women at the end of the war for their knowledge as many did not remain as time went on. They made it nearly impossible to break most resistances down when I was controlled by the Reapers. Although she is...unsettled, by the treatment I had to give to her after a incident on the field. She's been interesting to conversate with." - "She is dead now. The first causality of this crew. Many seem to be in mourning. But to me, I do not see the point. We have a war to win before we may be allowed to mourn the dead. Still. A unfortunate lost of a valuable asset."

Voice and other stuff updated