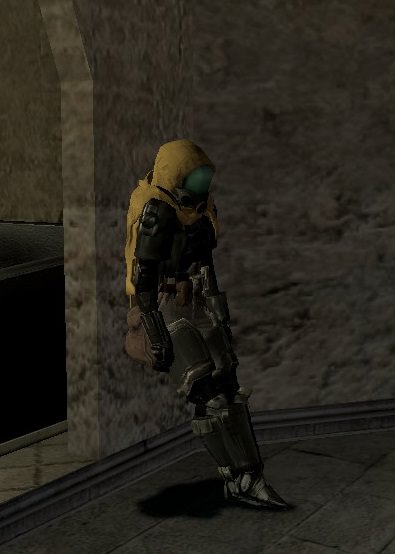 
Enhanced Scope - Get +5 when aiming at a target.
Grappling Hook - Allows the use of a grappling hook to access areas.
Vibrodagger - Can quickly switch and attack with a vibro dagger or similar weapon. Does not take a turn to switch to, can draw and attack on the same turn (+5 to attack against targets in range of dagger (+10 roll against targets in close quarters when using blade.)
Dioxis Grenade - Fill your grenade slots with grenades that create a cloud of chemicals that choke and eventually kill targets in an area.(Does damage over time with a bonus to organics, does not affect droids or constructs, anything that doesn't breathe naturally. 2 max)
Increased Agility - You have trained in acrobatics giving you a +10 to quick movements and acrobatic actions.
Long Range Training - Get a +5 for long range shots, +10 if using a sniper rifle or similar weapon.

Nakki: A  good friend, one that I could travel around with for years and have a capable figure to fight along with me. A secret-barer; he's back on Tattooine I believe - I hope me and him get back together for one more score.

The Captain:Even if I don't know his full name, the Captain definitely is one of the few people who know what they are doing.

Cato Marek - The first person I met on this planet, has a good head on his shoulders.

Tari - outside of us sharing a multitude of skills together, and her being the only other sane drunk in this place I'm not worried so much.

Sven Thorton - I haven't had much of a time to talk to them, but they are the oldest member of the crew it seems like.

Thad Heston - I knew his father, great man. I heard he opened up a bar once somewhere during my travels, I should go take a look for it.

Johse Malefor/LB-08 - I feel sympathy for his plight involving his brother, but he needs to learn patience is key.

The Battledroids: They are underneath Valiak's control as of this moment.

'Khan' - My first interactions with him were... not pleasant. Hopefully this changes.