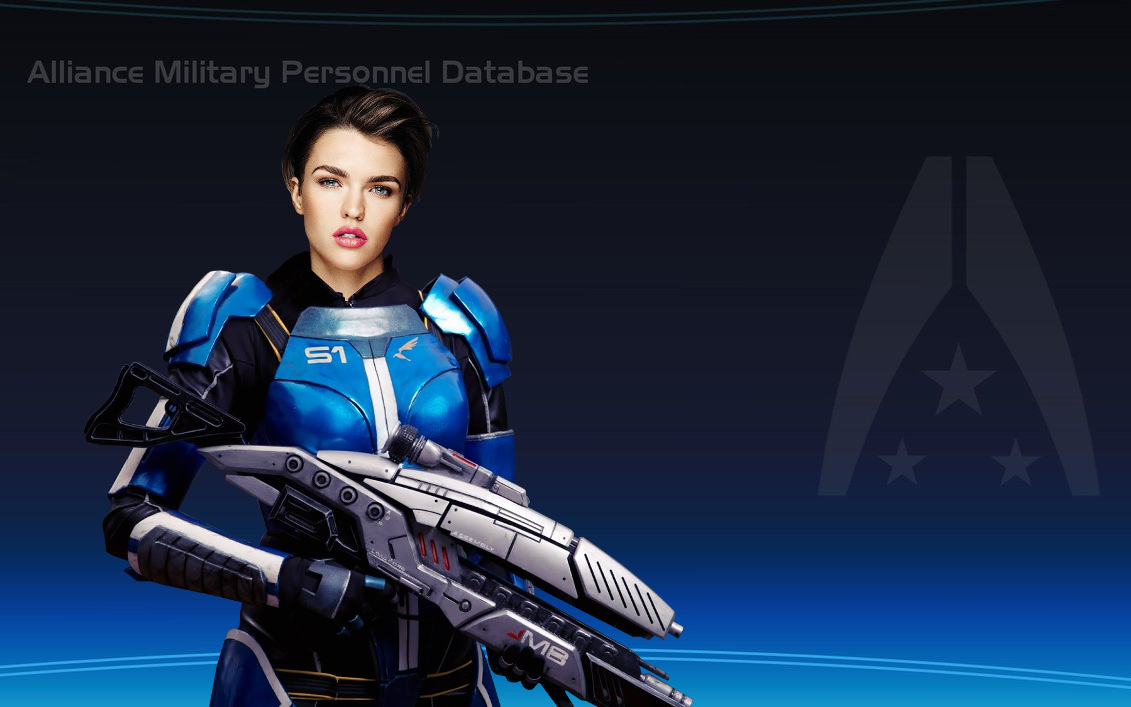 Another candid photo of Victoria is shown. Her hair is her regular brown, not the blonde in the photo, and she is snarling with a smile. An unknown marine is in the background with a bloody nose.


A candid portrait of Vicky taken before she enlisted.

Physical Appearance: Victoria is a 23-year-old that stands at 5'5, and is topped with boycut-length stacked brown hair sweeping over her forehead with an undercut. Her eyes are golden-brown, and thin and angled in shape. A small freckle dots underneath her right eye, atop her cheekbone. She has a small, pointed nose, and thin lips normally curved into a confident smile. Her body has a dramatic pear-shaped form and is rather short and stocky, and her skin is young and tanned golden. Her arms are above average in muscle mass. Her right arm is covered in a tattoo sleeve featuring heroes from the real and fictional past. Across her left bicep, "Man Eater" is inked. A small symbol representing the astrological sign Aries is inked on the back of her neck. A large decorative tattoo lays between and below her breasts, framing them. A healthy EKG line is tattooed on Vicky's neck, over her major artery. Across her right middle knuckles, starting from her pinky, it spells "fire" in ink. On the middle knuckle of her right thumb, the letter "o" is inked, and on the other matching knuckle on the other thumb, the letter "f" is inked. Across her left middle knuckles, starting from her pointer finger, it spells "fist" in ink. When in uniform, she wears pants and boots with no beret or gloves. When in armor, she wears the 2nd MSRC's recon armor and carries a Scimitar and Avenger.

Victoria Morello was born in early spring in Seattle, Washington of the United States to an average family as an only child. Her school records show flawless grades and an almost-flawless attitude. Her first six years in Seattle were generally normal, as were the next six years she spent living in Rome, Italy with her distant family which she considers her hometown. When she moves out to Chicago, Illinois, problems begin to arise due to an incident relating to her budding endometriosis leaving her bedridden and with major depression around age 15. She managed to keep her grades flawless throughout this time of struggle, and with some support from some of the spiritual practices she participated in for her self-proclaimed "half-assed Buddhism," she was on her road to recovery by 17. Once family wasn't around, Vicky had a close group of friends to rely on. They, although they paused her recovery in the process, helped her figure out who she was. Once her recovery started again on its own, she realized that this group had nothing to benefit her and she had no benefit to the group anymore, and she decided that enlisting would be the best way to finish her recovery. Like her school records, her basic training paperwork is flawless, stating that she excelled at all tests and kept a sane and professional attitude.

TO ALL WHO SHALL THESE PRESENTS, GREETING:
THIS IS TO CERTIFY THAT THE PRESIDENT OF THE SYSTEMS ALLIANCE
HAS AWARDED THE
PURPLE HEART
ESTABLISHED BY GENERAL GEORGE WASHINGTON
AT NEWBURGH, NEW YORK, ON EARTH, AUGUST 7, 1782
TO
PRIVATE FIRST CLASS VICTORIA MORELLO, SYSTEMS ALLIANCE MARINE CORPS
FOR WOUNDS RECEIVED IN ACTION
IN HOUSTON, TEXAS, ON EARTH, ON FEBRUARY 12, 2186
GIVEN UNDER MY HAND FROM SSV KILIMINJARO
THIS 17TH DAY OF FEBRUARY 2186