Weapon Ability: Precision Shot - A charged shot that makes your weapon more accurate for a single shot.(+7 bonus to hit, 3 turn cooldown)
Equipment Ability #1: Dioxis Grenade - Fill your grenade slots with grenades that create a cloud of chemicals that choke and eventually kill targets in an area.(Does damage over time with a bonus to organics, does not affect droids or constructs, anything that doesn't breathe naturally. 2 max)
Equipment Ability #2: Grenade Launcher - Carry a grenade launcher with four rounds maximum, good anti personnel and weaker against armor. Can be used at a much farther range with the same effect as a thermal detonator.
Equipment Ability #3: Trip Mine - Can carry small laser activated mines that can be stuck onto objects.(2 max)
Trained Ability #1: Strength Training - You have a lot of muscle mass and get a +10 bonus to any strength related rolls.
Trained Ability #2: Long Range Training - Get a +5 for long range shots, +10 if using a sniper rifle or similar weapon. 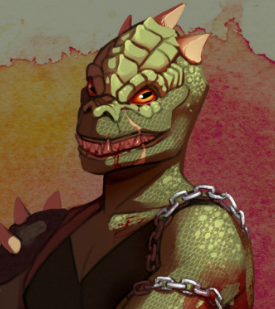 
Physical Description:
A 6'6ft tall Trandoshan with deep, green skin, burning reddish-orange eyes and dull, yellow teeth. He has numerous signs of hardships that not even the shedding of his skin can take away including the sighs of a large, fresh scar torn across the left side of his jaw and cheek. He speaks with a guttural tone when provoked and resigns to a sort of restrained, low pitch voice when speaking normally. He has large spikes on the back of his head which appears to be a abnormal feature among some of his better known kin.