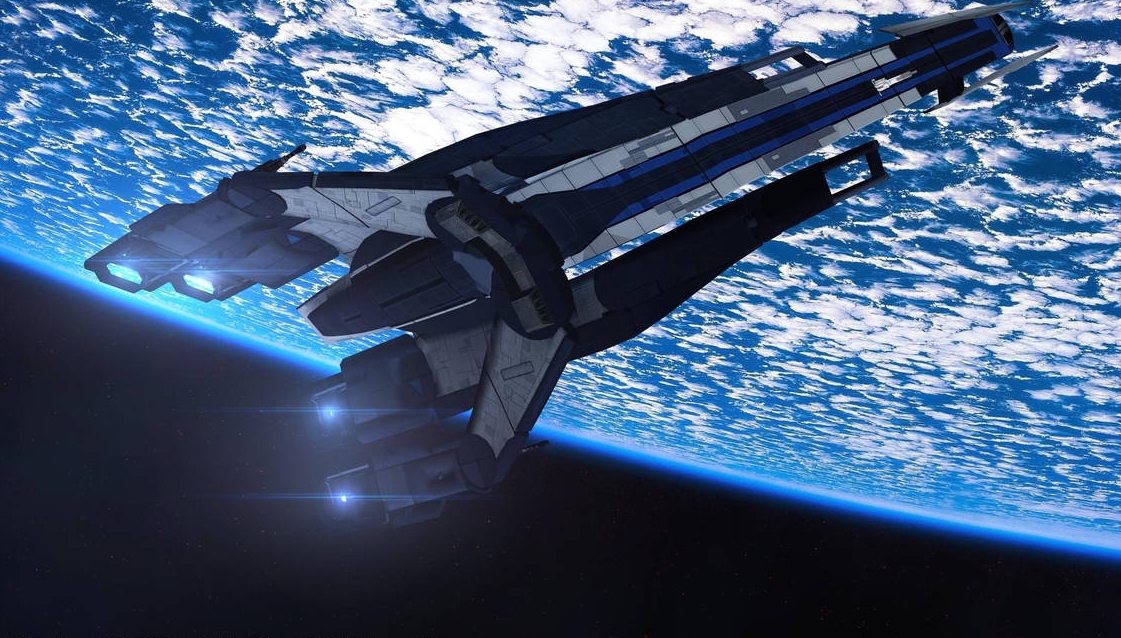 Javelin Disruptor Torpedoes
The Constantinople is armed with two Javelin disruptor torpedo launchers that are fired from the joints between the engine mounts and the primary hull of the ship. The Javelin serves as a close-assault weapon that uses paired disruptor torpedo tubes that are magnetically "slung" onto the ship's exterior armored hull. The torpedoes are able to be fired on converging trajectories, detonating in a precisely timed sequence that allows dark energy emitted by their warheads to resonate, magnifying the result in a warp effect in space that literally shreds the target apart.

Spinal-Mounted Mass Accelerators
The Constantinople's auxiliary weapons consist of two small mass accelerator cannons mounted beneath and to the side of the main cockpit. Mass Accelerators function much like standard infantry and vehicle weaponry, propelling a shaped projectile with mass effect fields and charged rods in a straight line. They are only useful against targets directly ahead and in close proximity to the vessel.

Underbelly Thanix Cannon
The Constantinople's extremely powerful, Turian-developed Thanix cannon is mounted on the underbelly of the ship, just rear of the cockpit compartment. It fires a magneto-hydrodynamic beam, much like the weapon the Reapers used, and as such is capable of ripping through armor with ease, but it generates an immense amount of heat when fired and requires its own suite of computers & heat sinks.

2220 Refit: The Thanix Cannons were upgraded by Armax Arsenal and Hahne-Kedar after the Battle for Earth, using technology scavenged from the wrecks of Sovereign-class Reapers. The weapons now operate more efficiently and require less expensive systems to maintain, where the 2183 variants required massive, specially-designed cooling units.

Kinetic Barriers
The Constantinople is equipped with a standard system of kinetic barrier shielding, specialized mass effect fields that halt incoming projectiles. They are ineffective against extremes of heat or radiation, such as lasers and particle weapons, or planetary and celestial hazards.

2220 Refit: Kinetic barriers are far more powerful in modern times, thanks to Reaper technology, though certain models are prone to malfunction due to their systems being fried by the firing of the Crucible.

GARDIAN Lasers
An array of anti-missile and anti-fighter craft GARDIAN (General Area Defensive Integration Anti-Spacecraft Network) point defense lasers that are invisible to the naked eye unless charged up to their maximum setting.

Anti-proton Thrusters
The Constantinople's main propulsion is provided by four large anti-proton thrusters, with both aft and forward exhausts. Anti-protons are injected into a reaction chamber filled with hydrogen. The resulting matter-antimatter annihilation provides unmatched motive power. The exhaust of anti-proton drives is measured in millions of degrees Celsius; any vessel caught behind them will melt like wax in a blowtorch.

Fusion Collider Plant
Power for the Constantinople's drive core and electrical systems is provided by a nuclear fusion collision plant. H-fuel cells provide auxiliary power in case the main reactor is shut down.

Tantalus Drive Core
Integral to the Constantinople's stealth systems, the oversized Tantalus drive core generates mass concentrations that the Constantinople "falls into", allowing it to move without the use of heat-emitting thrusters. It also generates the mass effect field around the ship that enables faster-than-light travel. The design is based on that of the Normandy SR-1, but is slightly different, being vertically oriented relative to the ship instead of horizontally oriented. The Constantinople's drive core is three times the size of the SR-1's drive core.

Stealth Systems
Along with the Tantalus Drive Core, the Constantinople is able to temporarily sink her heat within the hull. Combined with refrigeration of the exterior hull, the ship can travel undetected for hours, or drift passively for days of covert observation. This is not without risk, however. The stored heat must eventually be radiated, or it will build to levels capable of cooking the crew alive.