Two hundred thousand years ago. Onboard the JRV Gn'bthnknyth 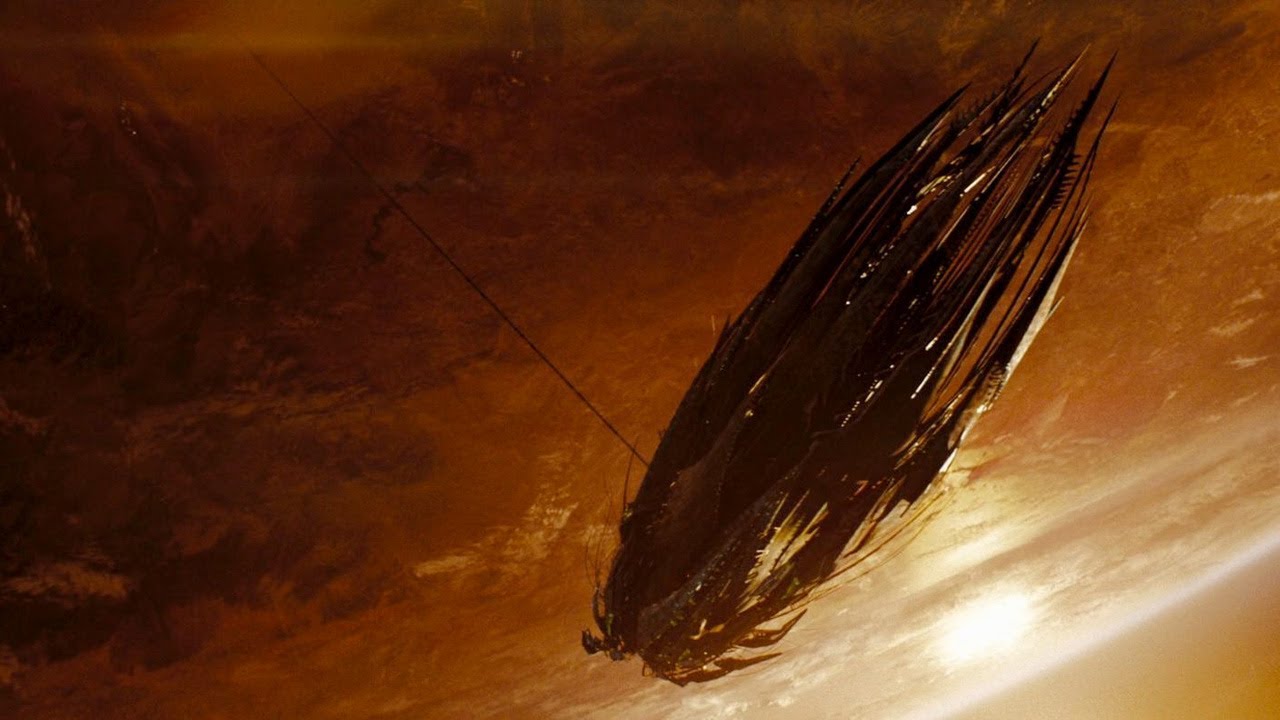 (The JRV Gn'bthnknyth)
With each passing moment the situation continued to worsen. Several A.I Captains have been taken out. With only two left standing to repair and maintain the ship in combat against the massive machine-like ships. The Platinum-General announced to the ship "Retreat to the Heart,  We have lost the battle. I will not sacrifice the rest of our ships for the other races." The Gn'bthnknyth and the other cruisers, dreadnoughts and frigates held off against the massive machines as a wormhole was created for the fleet. Without a moment's delay the ships fled into the wormhole and sealed it from behind. Leaving a dreadnought to guard the wormhole and sacrifice itself to block the Old Machines.

The Platinum-General stepped up to the podium overlooking the bridge. His helmet de-fabricated as he spoke "How many are left, Guardian?" A robotic voice answered with a silk-like tone. "There are only three fleets remaining, Platinum-General. The 2nd, 4th, 10th and 20th fleet were lost, all hands. We only have the 1st, the 5th and the 9th left." The General shook his head and slammed his fist into the railing of the podium saying "Open communication to the Defense Matrix....Everyone, now hear this. The battle was lost. The Adversary has broken the line. We have sacrificed the outer colonies to the threat. All forces are now being ordered to surround and contain the Heart of the Expanse. We must buy ourselves time to complete our research. As for the rest of the races in the galaxy..They have only themselves to depend on." The General stood up and tapped on his holographic gauntlet saying "Take us to the Ark." The Guardian responded "I am sorry, General. Only the Overlord has permission to head to those coordinates." The General spoke more firmly this time. "I do not care, Do it."

The JRV Gn'bthnknyth threw itself into a wormhole. Leaving the rest of the fleet to spread out and maintain their holds on the traveling network of FTL-nodes. Meanwhile the Gn'bthnknyth arrived to a uncharted system where a massive space-dock was built next to a gas giant. In the dock laid a massive ship, nearly the size of a dreadnought. But not as big as the Gn'bthnknyth. The General spoke into the podium on the bridge as communications were established. "Get me The Designer. I must speak to him immediately." The Gn'bthnknyth floated slowly towards it's destination as a pale-faced helmet appeared in a video feed. "Platinum-General you don't have the clearance to be h-" The General interrupted "The Overlord sits at the Heart in defense of our last hope. I doubt he cares now, Designer. Tell me. Is it ready?" The Designer nods saying "Yes. All two hundred thousand survivors are accounted for. We have the coordinates set for the nearest galaxy. Andromeda." The General curled his fingers and wrapped them over eachother with his other hand's fingers saying "Belay that. Change it to the Milky Way galaxy." The Designer tilted his head in shock saying "What? Why?? The Andromeda galaxy holds everything we n-" The General stepped forward to assert his dominance. "-And that's why they'll be expecting us to run to. If we plan on surviving extinction then we must assure that the Ark reaches it's destination unnoticed. They have eyes on the other galaxies. But the Milky Way is far enough away to draw off suspicion. I demand you reroute it's coordinates now."

The Designer sighed saying "I will...Fulfill your request, Platinum-General. The future of our species hinge on your words." The General slid his hands behind his back saying "If the Overlord is correct, Then we may still have a chance. But I will not leave it up to luck. Send the Ark now. Before they approach our borders." The Designer nodded in the video feed asking "Who shall lead them, General?" The General turn and stopped. He looked back saying "The Seeker. He is the youngest. But he has the most potential of all those being sent. His very blood was made for this." The Designer paused and offered a nod saying "I have no doubt your son will lead our people to glory, General." The General fell silent. He then motioned to the crew saying "Take us to the front-lines. Before they arrive. We will see the Ark away."

With that, the JRV Gn'bthnknyth and The Ark ventured out into the far edge of the Triangulum Galaxy. And with a final salute from The Platinum-General and his crew, the Ark slowly glided out into space and into the great beyond. The crew of the Ark entered their hibernation pods and began the long journey to the Milky Way...