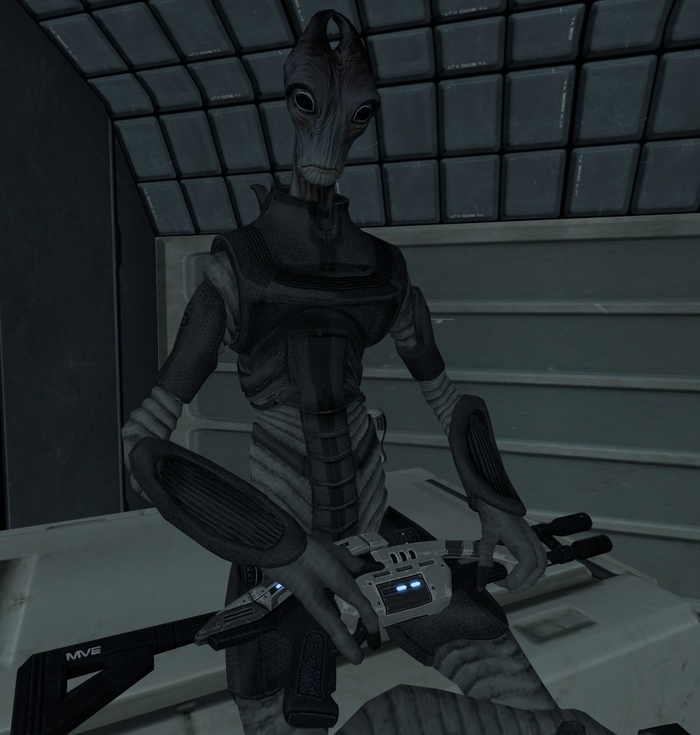 Physical Appearance: A Salarian standing at the height of six feet with a lanky and skinny build like most other. His eyes are large and oval and have thin membranes in place of eyelids with brown irises. His armor consists of multiple colors camos, varying in occasion. His voice sounding decent toned and sharp, while being able to speak quite fast.

Kirrahe was the best I could find

Training:  Salarian Reconnissance Training, Ambush Tactics, Sabetour Tactics, Marksman Training, Special Tasks Group Training, Defensive Martial Arts (Brazilian Jiujitsu and Krav Maga)
Assignment: 2nd Marine Special Reconnaissance Company
Operational Status: KIA
Previous Occupation(s): Salarian Military - Reconnissance Soldier (2nd Reconnisance), Special Tasks Group - Reconnaissance Marksman (13th Inflirtation Regiment)
Specialization: Marksman
Awards/Decorations: The Silver Dagger (During Operations on Jaëto, final surviving member of his squad, person-in-charge being Imor), Star of Sur'Kesh (Overwatch for STG groups during operations on Sur'Kesh against Terroristic forces), Purple Heart (Sustaning multiple wounds in combat engagments on Aeghor), x6 Sur'Kesh Leaf (2 Injuries sustained in assisting Turian forces in providing Overwatch and Recon, 1 Sustained in Recon operations in combination with Alliance Troops, 2 Sustained in the Eagle Nebula from Hegemony Sympathizers, and 1 in a Skrimish on the Ismar Frontier), Combat Action Ribbon (In fighting against Hostile forces)
Battle/Service Record: Deployed to Outer Council and Inner Council Space as part of 2nd Reconnaissance during operations with Council Species forces until 2214. Transferred to STG as a Lance Corporal under the 13th Inflirtation Regiment as a Marksman later in 2214. Conducted Black-ops in New Hegemony Space in 2215. Gathered Intelligence in Omega Space on known Hostile forces with Terroristic ideals against the Salarian Union in 2216. Conducted an Sabetour Operation in contested space later in 2216. Assisted Alliance and Heirarchy Forces from 2217 to 2218. Gathered intelligence in the Persiues Veil as a Corporal later in 2218. Conducted two operations in the Eagle Nebula in 2219. Engaged Hostile forces in the Ismar Frontier during Reconnaissance in 2220. On Sur'Kesh took down multiple Terrorist cells with other STG forces from growing hate for the Salarian Union by other species, the 13th Infiltration Regiment being recognized for the majority of the strikes, with Imor noticed for his bravery and excellence in his field, in 2221 he was promoted to Sergeant and awarded the Star of Sur'Kesh. Deployed in intelligence gathering operations in Batarion Confederacy space, leading his own squad and conducting sabatoge whenever possible in 2222. Led a squad in Reconnaissance in Attican and Traverse Space at the start of 2223. Assisting Heirarchy Forces in ops against criminal elements later in 2223. Conducted black ops in New Hegemony and Batarian Confederacy space from 2224 to 2225. In 2226, he led a squad on Jaëto against overhelming terrorist forces, conducted recon before engaging and halting attacks on the Salarian Colony, however his unit had been stuck in waiting for Reinforcements and soon wiped out with Etik Imor becoming unconsius from multiple wounds as Reinforcements had arrived. He was later hospitilized for most of 2226, before fully recovering and accepting a transfer to work with a multiple-species Special Reconnaissance Unit in the Alliance, giving up his rank in-doing so.
Casualty Classification: KIA
Date Joined: 22270107
Time Within Company: Less than 24 hours

Yulant Hurji: For years we had fought and served the Union together my friend, as such it was sad to see you pass on Jaëto. What we had done there in that day, was necessary for the saftey and protection for all the innocent lives in that colony, you were a great assistant squad-leader part of the best squad any non-commissioned officer could of asked for. You and the rest of the team showed unwavering patriotism and fearless desire to fight so we may hold the line to get rid of a growing threat. I do not know how or why I have survived, but currently I may know exactly why with my transfer, I wish the best for you, as soldiers like you are what this galaxy requires for continued peace as you define the great achievements of our people.

In the year 2194, Etik Imor had been born with a number of other hatchlings on the technologically thriving planet of Sur'Kesh, falling under the majority ninety percent of males as his egg was left un-fertilized. He was part of a clan, as reproduction was as simple as any other business. Growing up, he was as intelligent as the rest of his brethren, he was no scientific genius but his own ideas of thinking and a different mindset played a large part in the future as it had grown rather close to reality, with his peoples roles being easily defined, there was no chances as a politician. Etik had looked onto the more popular fields of his own gender, business, academia, or the military. In knowing of his own capabilities, he saw no more need of businessmen or academic geniuses, however, his people required protection. Etik knew the popularity of his people were never much among the minds of the people, as the past actions during the Reaper War had left a sense of need to do what he could to redeem his own kind.

At the reasonable age of eighteen, he had enlisted into the military as a Reconnaissance Soldier, aiming rather high as he delved into a field quite foreign to him. Overtime however, he had been trained into a more than capable soldier, seeming to even excel at his role as he took on combined arms operations, helping spot targets, dangers, and whatever else it may of been in the 2nd Reconnaissance, made up fully of Salarians, however they played support roles as they provided overwatch for other council species. However, he had seen decent service in operations consisting fully of Union forces, with the majority being made up solely of the 2nd. In time he saw room to grow in the STG, being transferred with commendations as his record showed growing improvement. Now part of the 13th Inflirtation Regiment as a Marksman, he had delved into the thriving intelligence community the Salarians had established. For years, Etik had been involved throughout in multiple Black-ops operations, Intelligence gathering, Sabatoges, a few skirmishes, and Reconnaissance all across the galaxy in mainly hostile space, every year found Etik had been in a new place, conducting whatever operations given to him and doing what he can to do even more. As the years went on, he raised through the ranks as a Corporal, and two events had truly stood out in his line of service. During operations on Sur'Kesh, the stakes had been raised quite high as terrorist forces seeking to attack population centers had been easily found and monitored, the 13th Inflirtation Regiment and multiple other STG groups had converged together and conducted missions halting any attacks, and destroying away the forces. Etik's unit had been the most active, seemingly resting at a minimum and being quite aggressive as they were becoming more and more recognized, while within the unit Etik showed great achievements as he showed exceeding performance in his field as a Marksman and leadership traits. As their operations came to an end on Sur'Kesh, a majority of the 13th, including Etik, had been awarded the Star of Sur'Kesh in recognition of their great magnitude of service, self-less actions, and excellency in their field, with Etik also earning a promotion as a Sergeant. As the years went on, Etik ran operations with control of his own squad, all leading up to the events in 2226, on the Salarian colony of Jaëto, a plot of a mass campaign by terrorists made up of multiple species had been foiled, the first scene had been Etik squad representing the 13th Inflirtation Regiment, at first he had conducted Reconnissance as he relied plentiful of information on the oppositions troops, assets, and plans from communication hijacks. As the days went on, Etik had been informed of reinforcements coming together to take down the stationed forces, instead of waiting Etik took his squad in, conducting sabotages and espionage as the dateline for the groups attack had continuously pushed back with some of their assets completely disabled from Etiks actions, but it seemed not to matter much as rather continue waiting, opposition forces begun their attack prematurely from their known timeline, leaving Etik no choice in halting their advanced as his squad became overwhelmed, taking out multitudes of forces, with trapped pathways, and excellent marksmanship and soldiering by the squad. As reinforcements had been sent out, Etiks squad grew increasingly smaller as he lost the entirety soon after, with himself becoming heavily injured and falling unconscious with Salarian forces atlas arriving shortly afterwards and wiping out the terrorist threat. In the following months, Etik recovered and fell nearly broken by all his lost friends, as he returned into service he was offered a transfer in a greater position on the multi-species team of the 2nd Marine Special Reconnaissance Company knowing his lost squad, he gave up his NCO rank and accepted such an offer in hopes of representing his people in greater regard as he had always wished to.

Nigga you expect me to read all that shit