December 23rd, 2226, Edge of Interstellar Space in the Aethon Cluster

The interior of the massive dreadnought was a welcomed sight for the weary Architect. He went on navigating through the gargantuan, shifting structure until he found a small pad near the engineering section of the ship. He stepped onto the pad and closed his eyes as a white flash enveloped him, and transported the Architect up towards the bridge of the ship using a dark energy current. He stomped out towards the bridge of the ship with his fists clenched, saying, "Advisor. Did we lose the last of the fleet?" The Architect went silent as a strange, vaguely humanoid machine slowly floated down from a hole in the ceiling where various other mono-task drones worked. It nodded its oddly shaped head in affirmation, saying, "<:: All native ships have been routed with decoy flares, Architect. The Dreadnought is undergoing repairs to the frontal compartments at this time." The Architect stopped and spread his arms out to his sides. "Good. Materialize what we can't move without. We will fix the less important parts of the vessel later." The bridge's ceiling panels slowly shifted and revealed a large station over the elevated Captain's podium. Small, complex mechanical devices began to unseal the Architect's armor until an exposed, glass-like hull was revealed underneath the chest armor. The glass slowly opened up and an eight-foot tall humanoid fell to the floor on his hands and knees. The being coughed, taking effort to stabilize and slow his breathing.  The Advisor floated down next to the Architect, extending one of its grasper limbs. "<:: Architect, are you stable?" The Architect stood and pushed the Advisor away gently and calmly. "I'm not used to using the suit for so long, but that does not matter now. What is the status on the two Hunters we left attached to the Constantinople in our retreat?" The Advisor floated to the front of the podium, stating, "<:: Unknown. We will have to wait and see if they are successful. In any case, I have planned a jump pattern back to Deep Space once they arrive to the coordinates I told them to follow. They should return here once they've completed their objectives." 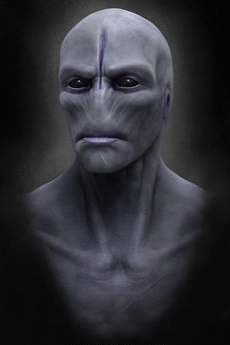 The Architect held out his arms to the sides and spread his legs as a bulky drone fabricated a new set of stark white, skintight fatigues onto the Architect's body. He pressed his fist against his face and coughed, quickly saying, "Analyze for foreign contaminents, Advisor. Now." The Advisor floated casually in front of the Architect, a thin scan wave passing over the Architect's body. "<::You are not infected or ill, Architect, but you are dehydrated and fatigued." The Architect glared at the Advisor for a moment, before stepping towards the arch-shaped observation window of the bridge. He narrowed his eyes as an Alliance Kodiak jumped in front of the ship, shortly followed by a familiar looking Normandy-class vessel...