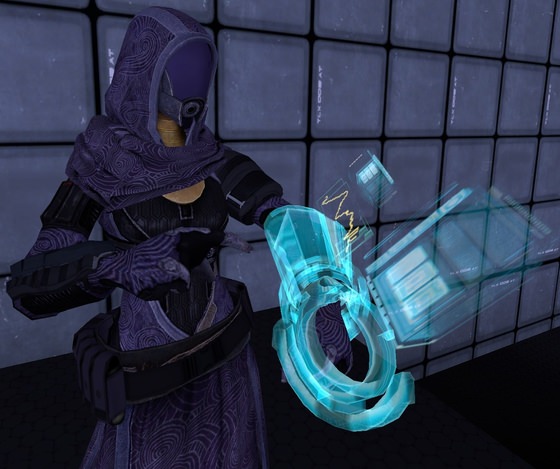 Physical Appearance: A Quarian standing at five foot six inches, with an Ectomorph body type. Her suit consists of average equipment and the traditional Selmaas, with a few additionals, from a utility belt, light padding, and a miniature mounted computer on her forearm. Facial features of any sort are distorted and nearly hidden by her visor. Her voice carries a robotic tune from the mask, with a slightly lowered pitch and a aged tone.

Shala'Raans voice is the closest

Training: Taught by multiple mentors on ship and general Engineering aboard the Heavy Frigate Yopal and Cruiser Tora, no traceable record of trainings from the lack of diplomatic relations with the Flotilla.
Assignment: 2nd Marine Special Reconnaissance Company
Operational Status: Active
Previous Occupation(s): Engineer aboard the SSV Ronne a research Corvette (Named after the Ronne Antarctic Research Expedition), Freelance Engineer stationed on Highbreeze Logistical Outpost on the planet of Sidon during the Skyllian Blitz, Engineer abroad the Quarian Cruiser Tora during the Reaper Wars, became the Chief Engineer of the Cruiser Tora later in 2186
Specialization: Chief Engineer
Awards/Decorations: Meritorious Civilian Service Award (Presented by Major Alan Foster for her actions in Highbreeze Logistical Outpost)
Battle/Service Record: SSV Ronne - Research Corvette - Highbreeze Logistical Outpost kept maintenance and repairs during the Skyllian Blitz as it supplied forces on Elysium - Aboard Quarian Cruiser Tora she served as an Engineer, fighting Geth patrols with small skirmishes across the Perseus Veil, and participated in the fighting against the Geth fleet for Rannoch and against the Reapers during the battle for the Citadel - Made the Chief Engineer of the Cruiser Tora after the past ones death during the battle for the Citadel - Fighting against Numerous other Pirates and Mercenaries, along with remaining Geth.
Date Joined: Joined the research expedition at the end of 2174 up to 2176 and leaving sometime after the Skyllian Blitz, joined once again in 2226
Time Within Company: 24 hours

Rel'Feela vas Tora (Deceased) - Ne'Bahnté, for the longest time we had spent each and every moment of our lives together, ever since we met. May it would of been murderous Pirates, the crazed Geth, and even the Reapers, we have seen it all together. I still remember your passing like a cancer stuck to my heart, hearing your heart beat into its last moments broke mine as I watched you slowly fall into an ever lasting sleep. Nothing could put a smile on my face ever again, but the time we've had, we made sure that it was lived up to its fullest, from atlas returning to a homeland taken away from us, to creatures that would see us all destroyed in the sake for their own wicked desires. All of the happiest times in my life had been with you, the khelat we had cannot ever be broken, I remember you presenting the Pal'tec vis surden, how my eyes brightened with joy and tears while you couldn't stop yourself from laughing after seeing such a sight. I remember how you fell with shock, as I told my friends about how you were my Inszel, only for you to say the most dearest thing to me, 'My Palla'. What we went through was a journey, from our first steps into Pemla'tiyl, growing ever so eagerly into our Hecs'tiyl, and finding ourselves in dumbfounded realization of our Felz'tiyl.  I never knew I'd do the things I've done, but I am only ever happier knowing I got to experience it all with you. May you walk upon peace and find rest until I join you once more... Keelah se'lai Saera.

LtCmd Michael Wolff: Our conversation was something I never figured I'd have. I had lost hope, as Rel passed away, the broken bits of any hope of the future was swept away, I signed on as the last good I'd do, but rather I've gained some part of myself. I begged for death to take me for a week at Rel's side once he was no longer alive, I could not find who I was for another month, my mind crumbled, the thoughts of him was the only thing in my mind. I age closer to my Resuit'qun with each day, but his strong will combined with what he said gave me a realization, of what Rel would of truly wanted, of who I really was, and what I needed to do. I do not know what the future has in store, but I wish to see it if I can.
-
Mister Wolff is a man with great values and an exponentially intelligent mind. His will is unmatched by almost all of the crew and I trust in his abilities to lead the Marines alongside of Mister Banner to help relieve the coming challenges. Being named Spectre is one of the greatest honors bestowed upon any member of a species, as they in a way become the face for their people, driving a torch through darkness and setting the example.

Cpl Jack Miller: A man who I met only briefly, but only minutes later did I hear his cries of agony as he was burned alive. I speak about his condition with almost no feeling, as such things have been always common, but knowing what he will have to go through to come into realization, the pain he must be feeling, the mindset he has. I still have the pistol he burrowed off to me, and I do hope to return it. I'm not sure what will happen to him, but he will be a changed man from what he used to be, a dark chapter in his life has arrived and I only hope that it's a short one.
-
It is unfortunate news of his absence from his duty. I had prayed dearly for his strength in conquering such a daunting task to come into reality of his situation but not all can be the strongest. Wherever he might be, it was un-like him to abandon his service to this galaxy, but I wish for the best for him and a much better life than what he had with us.

Spectre Martin Banner: I have not had any moment of long conversation with Mister Banner, in time that shall change as he is the leading Spectre alongside of Mister Wolff. His skills are without a doubt are among the best, as he had been a Spectre before and fought much like I within the end times, such actions deserve a great amount of respect as all who had been there in service of the galaxy knows of the horrors the Reapers had caused. His experience runs on for years, it is no doubt that he is a great example to follow for all the young Marines, however I hope for his name to be cleared of any wrongdoings as such were never his own actions.

GyC Emma Thatcher: Miss Thatcher is a wonderful member of this unit, she is quite pleasant and a brilliant individual to speak with. His father had been apart of the old Reconnaissance Company which had partaken in the War, and for such actions by her family it shows truly within Miss Thatcher as her leadership skills alongside the others help accomplish the impossible we are deemed worthy to face. I hope the best for her, a healthy life and a career filled with opportunities to display her marvelous abilities.

LCpl Tyrannus Stromunian: It is a great sight to see Mister Stromunian apart of our crew, as my suggestions for him to join us has been for the best. He is without a doubt a great pillar of the team, with his abilities he fills a role which the old Commander had left open, and his discipline shows his great abilities in Soldiery. I've had some conversations with him, all have gone wonderfully, but it would be prodigious to get to know him more, be it his family or views. I can only hope for the best in his actions much like many others.