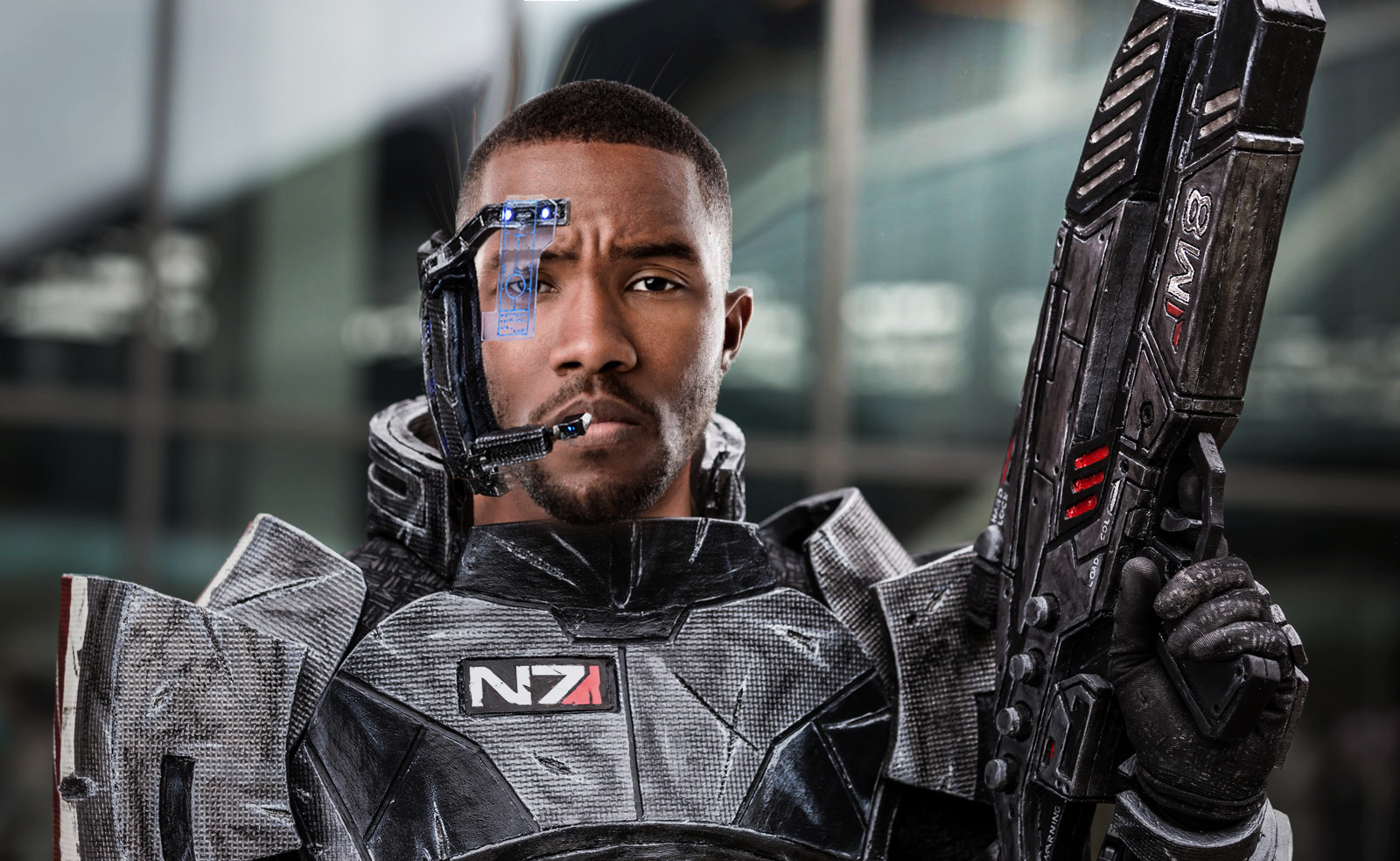 Adande Greene (2154- ) was a human soldier, the second human Spectre, and the first commander of the SSV Constantinople and the 2nd Marine Special Reconnaissance Unit. He is most known for his efforts during the Reaper War, in which him and his unit led guerrilla efforts on Earth and led several assaults on other planets such as Palaven and Rannoch. He, along with several other members of the 2nd MSRC, are regarded as one of the sole reasons that the galaxy survived the Reaper War.

Adande Greene was born on Earth in the metropolis of Chicago, United North American States. He was the eldest of his two sisters and brother. His mother, Tara Greene, raised all four children by herself. His father, Dontae Greene, was KIA during the First Contact War. While Adande had no feelings towards his father, his mother resented the Turians for his death Greene attended AJK Kaziameer, a school for low income children, Kindergarten-12th grade. It is here where Adande attributes many of his younger beliefs. It was the only place where he could constantly be fed and have warmth from the cold, harsh winters. His freshman year of high school, Adande adopted new friends, much older and more wealthier than him. They provided his family with food and protection from rising gang activity.

Naturally, Adande felt that he owed his new friends for helping him and his family when no one else would. Unknown to Adande, he was now involved in gang activity. The gang, the Almighty Vice Nation, had a powerful influence over the neighborhood Adande grew up in. Adande had little choice but to do as they asked, as they had given him everything for the past several months. However, Adande realized that what he had been involved in was inhereity wrong. He stopped answering their calls, and attempted to get away from the life he'd been living. He'd gotten a local job, and started providing for himself and his family on his own. This new life seemed to had been working for a few months, until everything went terribly wrong.

On August 24th, 2174, several AVN members gathered outside of Adande's residency while he was at work. Ten members, some of which were life long friends of Adande, barred his home, blocking all exits. They then flooded the house with carbon monoxide. All of his family, save for his youngest sister, Faith, choked to death in their home. Adande, after getting off of work, picked up his youngest sister from a sleepover she had been at, and returned to the sight of his entire family dead. This loss absolutely devastated Adande, and would affect his life for many, many years to come. Having little choice but to get out of the city, Adande gave his sister up to his grandmother, ten hours outside of Chicago. He then enlisted in the Alliance military, seeing it as the only way to make a new life for him and his sister.

Greene quickly established himself as a stand out soldier within the Alliance ranks. Excelling through basic combat training and OSUT as 11x Infantry, Greene found himself aboard the SSV Agincourt. It is here where he distinguished himself above the average marine and proved to his NCOs that he was a capable and confident leader. By his second year in service, Greene would be pushed through the ranks of PFC to Corporal, and Corporal to Service Chief.

As a Gunnery Chief, Greene began to flesh out his career as not only a combat leader, but a personal confidant off the field. In his ten months as Gunnery aboard the SSV Agincourt, this is where Greene learned how to not only lead his soldiers into combat, but how to better them when behind the wire. A personal testimony from Corporal Jacob Collier can be read (here), describing his time with Greene while onboard the SSV Agincourt.

The most notable combat mission Greene undertook was his eleven month deployment to the planet of Anhur, where Greene perhaps put himself on the map for the rest of his military career. The Battle of Icakiment (Click here to view more info) is, to many, the defining moment in Greene's time as a Non-Commissioned Officer.

For the next seven years, Greene would be in and out of the N7 program. Returning to Earth to only visit his grandmother and sister between N programs, he was tested physically and mentally for extended amounts of time, slowly but surely completing each level of N training until he eventually graduated from the N7 course. Greene was recommended to promotion to the Officer Corps, and before the board, he passed with flying colors.

Serving as the SSV Agincourt's XO, Greene was quickly fitted into the unit and served both a logistical and combat role. Aboard the ship, Greene ran day to day operations, ensuring the ship's functionality for the Commander. He worked closely with NCOs, and to much surprise of the ships marines, even the enlisted and lower enlisted of the vessel to help ensure a smooth chain of command was established and to show the marines that he was just as they were, a marine.

This behavior, unusual of regular field units such as the 22nd Alliance Marine Company attached to the SSV Agincourt, won Greene the respect and admiration from much of the crew and its marines.

On the field, Greene commanded the first section, having roughly eighty men directly under his command. Here, he led troops directly into battle, never shying away from a fight.


"2nd Lieutenant Greene could always be found among his men. So we're charging up the hill? Well,  so was he. Kicking down a door? He's kicking down the other. Crawling through the mud? Oh look, there he is, right with us. That type of stuff meant a lot. Crazy how much that'll do for a unit." - SvC Carrie Francia, element leader under the command of Greene. (Read more of his account of 2nd Lieutenant Greene here)

Within a year, Greene would find himself at the promotion board once again. However, to his surprise, the board recommended him for something more than the SSV Agincourt.

The SSV Constantinople, a state of the art Stealth Frigate, had just finished construction a month before Greene went to the board. It needed a Commander, one capable of its crew, its marines, and its worth. The board recommended Greene. Greene accepted the recommendation, and came to the board one month later. His record and his behavior proved he was not only ready for this role, but the one for it.

On July 6th, 2183, Adande Greene stepped onto his new ship, the SSV Constantinople. With his newly pinned Lieutenant Commander rank on his chest, Greene found himself in charge of his own crew. A special select of soldiers, handpicked by Admiral Hackett himself. Notable members of this crew were: Rachel Elizabeth, Flynt Thatcher, Martin Banner, and Travis Kelce. This would form the basis of the 2nd Marine Special Reconnaissance Unit. The Alliance, already well into the Eden Prime War, would quickly put the new marine unit into action.

Their first objective: Eliminate a Geth Stronghold on the planet of Trident.