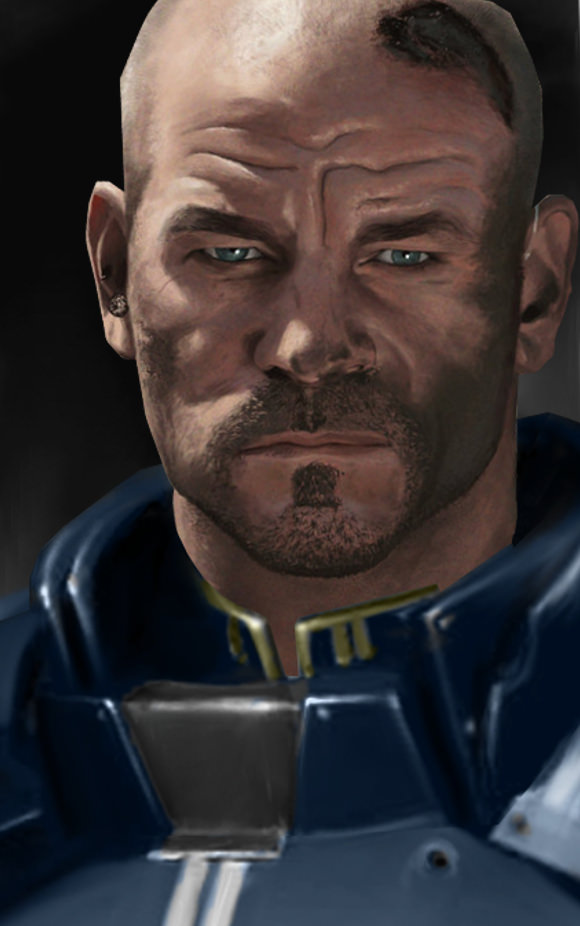 Martin Banner during the Reaper War

Martin James Banner (2153-2224) was a human soldier and elected leader who served in many positions such as an enlisted marine, a freelance contractor, a Marine Officer, the Alliance Special Operations Command Commander, Governor of Anhur and Reg'ys of the Anhurians. Martin Banner is most noted for his time in the 2nd MSRC before, during and after the Reaper War.

While Banner was only four years old, the First Contact war broke out and his parents left him on Luna during the duration of the war. After the war had ended, Banner went back to living under his parents custody. Martins Fathers’ vessel had been critically damaged during the war and he witnessed several horrific events which caused him to develop PTSD. Growing up, Martin was constantly haunted by the possible outcome of going to war reflected in his own father but nonetheless decided to enlist in the Alliance Marines like so many of his family had before.

Being a marine wasn't all glory for the alliance in his first years, despite the fact that he was placed in a highly mobile marine division, his unit usually stayed on their cruiser as it patrolled perfectly safe areas of space. He did not, however miss out on any experience, learning much from his fellow marines and squad leader. After serving in the Corps for five years, Banner would see his first combat action.

In 2176 the Skyllian Blitz occurred and Elysium was under enemy control. Banners fleet was one of the first to respond to the attack and his vessel was boarded by a damaged enemy cruiser. After being boarded, Banners squad was ambushed in a cargo hold resulting in the deaths of 5 marines, including Banners squad leader. Banner was able to organize a retreat and concurrent defense of his cruiser, an action that awarded him with promotion to Service Chief then Gunnery Chief as well as the Distinguished Service Cross.

Two years later, Banner led a platoon of marines as their Gunnery Chief in the Raid on Torfan. Banners ability kept casualties to a minimum relative to the total Alliance casualties during the operation and he was awarded a bronze star. Despite the casualty rate, Banner was still unsatisfied about what he thought could have been a better planned operation. As soon as his contract was up, Banner did not re enlist and instead elected to study.

Military Contractor
______________________________________________________
Banner began to study military sciences at highly proclaimed institutes across the galaxy. He earned a degree, however he only knew the doctrines of militaries which were not at the time an immediate threat to the Alliance. For this reason, Banner started a Private Military Company to go into Terminus Space and raise funds for his research. After some time doing this, Banner was offered a contract by the Systems Alliance and provided intelligence for five years until a new threat emerged.

In the wake of the Eden Prime War and the Battle of the Citadel, Banner was offered a special assignment to help study and gather information on the Geth. Banner was attached to the 2nd MSRC, serving on the SSV Constantinople under the command of the second Human Spectre, Adande Greene. Banner and the 2nd MSRC conducted their missions for two months when they made contact with a hostile race known as Collectors.

Upon first contact with the Collectors, the 2nd MSRC was recalled for an official inquiry and investigation which put a time damper on the unit. However, at the end everything, Banner was offered a commission to serve the Alliance again as an Officer, given the rank of Staff Lieutenant and position of Executive Officer of the 2nd MSRC which Banner immediately accepted.


Alliance Officer Service
______________________________________________________
Banner Commanded the Second Marine Reconnaissance Company throughout it's campaign against the collectors and it's peacekeeping missions across the galaxy. The knowledge he gained on the galaxy and it's threats enabled him to become a far greater commander than he had ever been in his previous term as an Alliance Marine. He commanded almost every ground mission the company embarked on, seeing them all through to the end, most notably the Battle of New Thebes.

After participating in the bloody battle of New Thebes, the company was spared no time to rest. Days later, The Constantinople was back to responding to short term calls, their first call was a cargo ship being under attack by pirates. In truth, the ship and the call were a ruse by Cerberus in an attempted action against the Alliance, whether it was against the Constantinople specifically or just a random attack remains unknown to this day. The mission, however went from one sudden change to a much worse one when a Reaper vessel entered the system and engaged the Constantinople as well as three other Cerberus Corvettes in space. The Marines evacuated quickly and the Constantinople barely escaped the system and returned to friendlier ports.

Soon after the attack, Banner and Greene went to the Alliance to report the Reaper presence. The Company was then sent to Batarian space to gather concrete evidence. The 2nd MSRC indeed gathered evidence as they witnessed the Hegemony being annihilated by Reaper forces. Afterword the company returned to Alliance space with the intelligence but at that point it was too late. Reapers attacked earth catching everyone off guard and inflicting casualties on the MSRC who quickly evacuated and began the guerilla resistance on Earth.

Banner fought a guerilla resistance alongside the 2nd MSRC on Earth for three months. On the third month of the deployment, the Companies base was raided by a swarm of Collectors. The hangar door exiting the hangar the Company was in had been jammed up and Banner had to move to a console to open it. This did not give him enough time to evacuate in a kodiak with the rest of the company and he was left behind, marked MIA and thought to be dead, facing insurmountable odds. This action would see Banner awarded with the Medal of Honor.

Banner did however survive the attack and he was able to make contact with other resistance forces. He led a fight against the Reapers in a comms blacked out area on Earth until the end of the war. Afterward, he regained contact with the rest of the Alliance forces on Earth. Soon after, Banner was promoted to Lieutenant Commander and he was transferred away from the 2nd MSRC.

Banner, having neglected several invitations to ICT, finally accepted and began training at the Villa immediately. Being far more experienced than anyone else in his class, he was able to graduate at the top and was of course invited to return for more training. Already being certified with multiple N courses, Banner was able to complete his training in a year. Many of the instructors, being impressed by his professionalism and skill pushed to have him invited to be an instructor at the academy. Banner agreed to be an assistant instructor at The Villa, putting new trainees through ICT, making them skilled and disciplined fighters. While he was doing this, Banner picked up a side project in the Marine High Command, he further pioneered the Marine Reconnaissance through armor and camouflage designs as well as implementing training and doctrine he learned fighting his several wars.

After Banner finished training his first batch of ICT trainees, he decided that being an instructor, while fun to discipline 'little trogs', was too stationary. Banner had been donating much of his accumulated salary over the past several years to relief efforts as well as starting his own 'Galactic Salvation' organization aimed at rebuilding the outer colonies that had been neglected in favor of the core planets of nations. The amount of money Banner had was minimal, so he elected to make a change through military force which he was so good at. Banner wrote up and proposed a small unit to work alongside law enforcement and take down illegal drug rings. The request was immediately approved and Banner was given a Stealth Corvette with a small crew and tactical combat team.

Long story short, the unit was successful and the drug lords were not pacifists. All ended well, however as Banner was well versed in combat, several thousand pounds of Red Sand was and several billions of dirty drug credits were recovered. The credits, at Banners request were sent to his organization and the credits would fast track the reconstruction, especially on Anhur. The unit was disbanded shortly after and Banner took leave right after.

Banner went back and forth between serving with the 2nd MSRC in the years before and the years after, participating in the operations to counter ‘Abraham’ as well as many other countless operations until he was promoted to Staff Commander and deemed too senior to conduct operations with the company, a fate that would eventually befall all the old crew.

Banner continued to gain the rank of Major and would become the commander for the Alliance Marine Special Operations Command. He would continue to revolutionize the Commandos of the Systems Alliance until he suddenly retired.

Banner traveled to Anhur where he began an aggressive political campaign to revitalize and repopulate the planet after its post Reaper War aftermath. The people who came to Anhur looked up to Banner as a leader and legend to whom they owed much to. In the wake of a new nomadic society developed on the planet and essentially a new culture being born, Banner was elected to lead it. In addition to being a political leader, Banner also took up a role as a military leader, conducting aggressive, mostly morally based, mercenary campaigns throughout the galaxy.

This was the first of two mistakes that would lead to Banners death. While on a light patrol, his formation of vessels was ambushed by Geth stealth frigates, a new innovation by the Geth Heretics. With the closest Rannoch Fleet at the other side of the solar system, Banner positioned his own ship, the Barbarossa,  in a defense of the rest of his fleet so they could escape.

After his fleet was out of range, Banner began the evacuation of his ship. He refused to be one of the first ones off and instead kicked the helmsman out of his seat so he could stabilize the vessel himself for his crew to be able to escape. He along with 6 other crewmen perished when the Barbarossa sustained too much damaged and was pulled into the gravity well of a nearby gas giant and lost, no doubt able to survive in such conditions.

Since Banners death, no new sole leader of Anhur has been elected. He is survived by his two sons Liam and Samuel Banner.