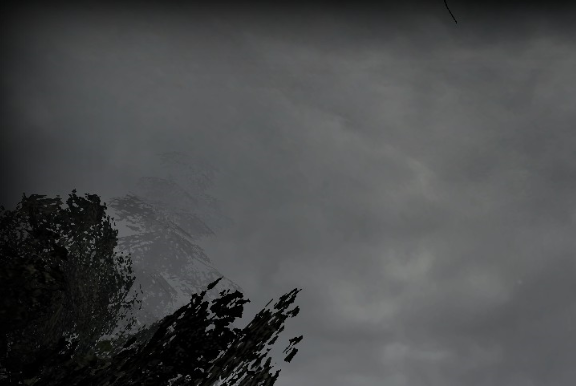 A figure is seen wearing a torn cloak draped over several times. He looks almost like a vagabond with the way he appears. Carrying a shovel and a Phaeston on his back in a crude fashion, a sling carrying a high-tech weapon. He appears to be on a mostly dead worlds, a old, nearly overgrown structure of a ship appears distant in the background with all sorts of vines, moss and muck covering the giant ship. It almost appears turian in nature, but nature has claimed it for it's own. The figure shoves the shovel into the ground and hikes back down to a small house, built out of logs and harden clay with only a few scavenged fences to surround the garden. Only one high-tech piece of equipment remains in the primitive sight, a turret with a solar panel affixed to the roof of the gun. Keeping a watchful eye over the yard.

The figure takes his rifle and slides it down to lay against the outside of the clay house. Inside is crudely built furniture, a deactivated heater and a makeshift stove. The figure glances around the house quietly and walks back outside. He looks up towards the stars and narrows his eyes as a object is seen slowly gliding down towards the surface. Landing only a few hundred meters away is a large, turian ship. A cloaked figure steps out of it and proceeds towards the small homestead.

The figure reaches up and pulls his hood back, exposing his turian features mixed with red, cybernetic augmentations. His eyes narrow and his breathing becomes hoarse. He stares on at the hooded figure with a glare that would cut down any man. And as the cloaked being came closer, the red of the cybernetics fade into a blue hue. The cloaked figure knelt before the turian and says "We know where the Zha'til is, Captain." in a garbled, almost mechanical voice. The Turian steps forward and places a hand on the figure's head saying "Take me."