Sanilra Edoris: She's a good girl, always enjoy talking to her when she's around; other than that she's a good combatant, but I guess that comes with being an Asari Commando, or, well, used to be.

EDIT: We've got to know each other more, she's supportive over the situation that's happening on Tuchanka, we get along well.

SvC Emma Thatcher: The other Service Chief on the crew, daughter of Flynt.. we have good talks. I don't know where he is now, but i'm sure he'd be proud of where you are currently.

EDIT: I'm so sorry about what happened.

OpC Droko Compor: This batarian has surprisingly good leading skills; I may not like them, but this one is starting to grow on me.

EDIT: I like him, he's a good guy after all, even if him and Miller went through some complications, but I guess I won't get in the middle of it

Jack Miller: Draven's son, wasn't expecting to find him here; seems like he doesn't likes his father much but he's a good kid. Recently he had shit happen to him, just hoping this won't scar him for the rest of his life.

1stLt Daniel Vernon: He's a good marine, puts his biotics to good use; he proved to be a worthy individual back at the prison, I want to see more of that.

LCpl Genesis: He's odd, usually he's standing there staring at me, or we'll talk about something completely random.. or he'll breach into rooms using a sniper rifle.

Anne Elizabeth: She's alright, we don't talk too much, but she's proven herself good.

HA Nguyen Thi Kim-Ly: She's odd, think I should put her in a ring against Genesis to see who wins that competition.

EDIT: Poor lad has no experience with all this, i'm starting to like her but, she also needs to get used to this so more people don't die.

Jarik Kinaro: Stick your nose out of shit that doesn't matter to you, poster child.

Douglas Boidheach: This man has been showing to be better than I expected him to be, he knows how to order things around and deal with problems whenever should they arise.. he's a good man with a clean head on his shoulders, and I like that.

Michael Wolff: He's a tough one, but that's what makes this human show, very responsible. 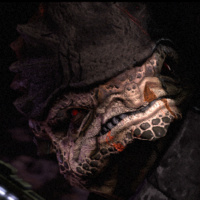 they did surgery on a grape