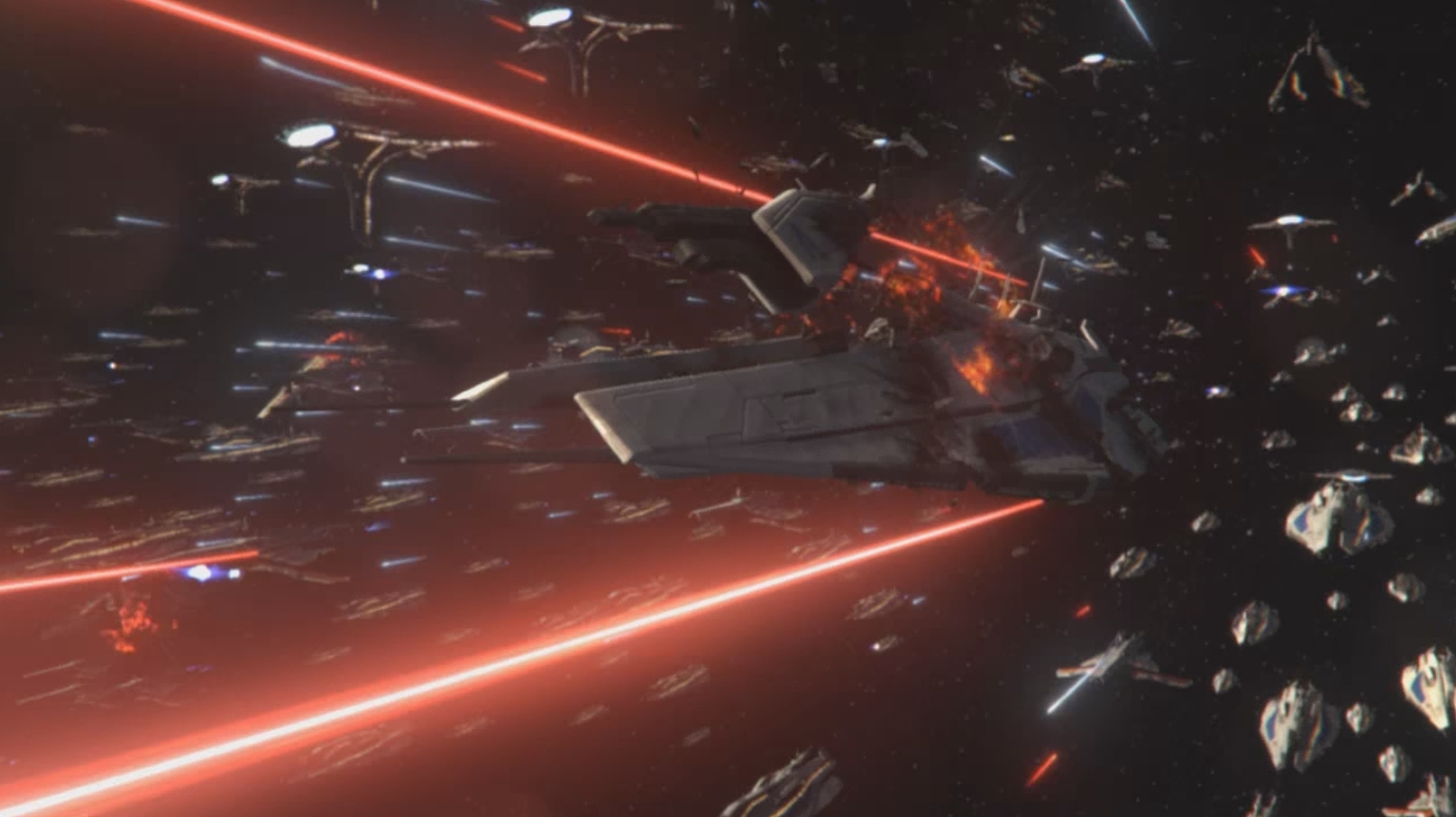 Sword Fleet takes heavy losses in the opening moments. SSV Manchester (foreground) was one of the first losses.
After the Battle of Cronos Station, Sword, Shield, and Hammer Fleets proceeded to a staging area near Eden Prime. Fleet Admiral Steven Hackett gave a final, rousing speech before Sword and Hammer proceeded through the Relay and towards Earth. When Sword Fleet flooded into the Sol system, the Reapers barely took notice. Only when the opening salvo, led by the SSV Normandy, was fired, did the Reapers turn and react. Millions of Oculi and thousands of Reapers flooded the space above Earth. Oculi and fighters immediately entered dogfights between the two massive fleets before the Reapers opened fire; gutting nearly a third of Sword in the first few shots. The absence of the Salarian Navy's stealth dreadnoughts was felt. The Turian and Alliance navies took heavy losses, while the Asari were able to hold the line with their impressive kinetic barriers. N7 and Special Forces teams cleared the landing areas in Rio, New York, Vancouver, Mombasa, Tokyo, and London. After the last Hades Cannon was brought down by Commander Shepard, Hammer was given the all clear to land.

Hammer forces deploy across the globe.
Thousands of transport craft and shuttles race for the Earth's surface, many being shot down by the Reapers themselves or Harvesters. In the end, only a third of Hammer forces designated to make for the Citadel survive the landing process. Thanix missiles are used to clear the Reaper Destroyers patrolling the streets near the Conduit, and Hammer forces cut their way through the destroyed city of London to reach it. The fight is long and grueling, with the Reapers literally throwing themselves at Hammer to stall them.
Meanwhile, in orbit, Sword is continuing to take heavy losses. The Destiny Ascension is critically damaged and almost destroyed by several Destroyers grappling onto its hull and firing directly into it. SSV Robert Oppenheimer is crippled, unable to move efficiently. The Rachni bioships are almost entirely wiped out. Admiral Han'Gerrel pushes the Quarian Heavy Fleet forward, opening fire, and the Geth immediately surge their dreadnoughts forward into knife-fight range with the Reapers. Harbinger and several other Reapers break off from the space battle and descend to London.
Amidst the chaos, Shield Fleet, commanded by Admiral Hackett, arrive with the Crucible in tow. As Shield Fleet joins the battle, Harbinger and several Reapers suddenly break off from the space battle and speed down to London. Back on the surface, Hammer has reached the edge of the No Man's Land around the Conduit. Harbinger lands next to the Conduit, and by all accounts, began taunting Commander Shepard by name. As Hammer raced to the Conduit, Harbinger opened fire, nearly wiping out the entire force. Somehow, Shepard and Admiral David Anderson made it to the Citadel, and opened the Wards so the Crucible could dock. 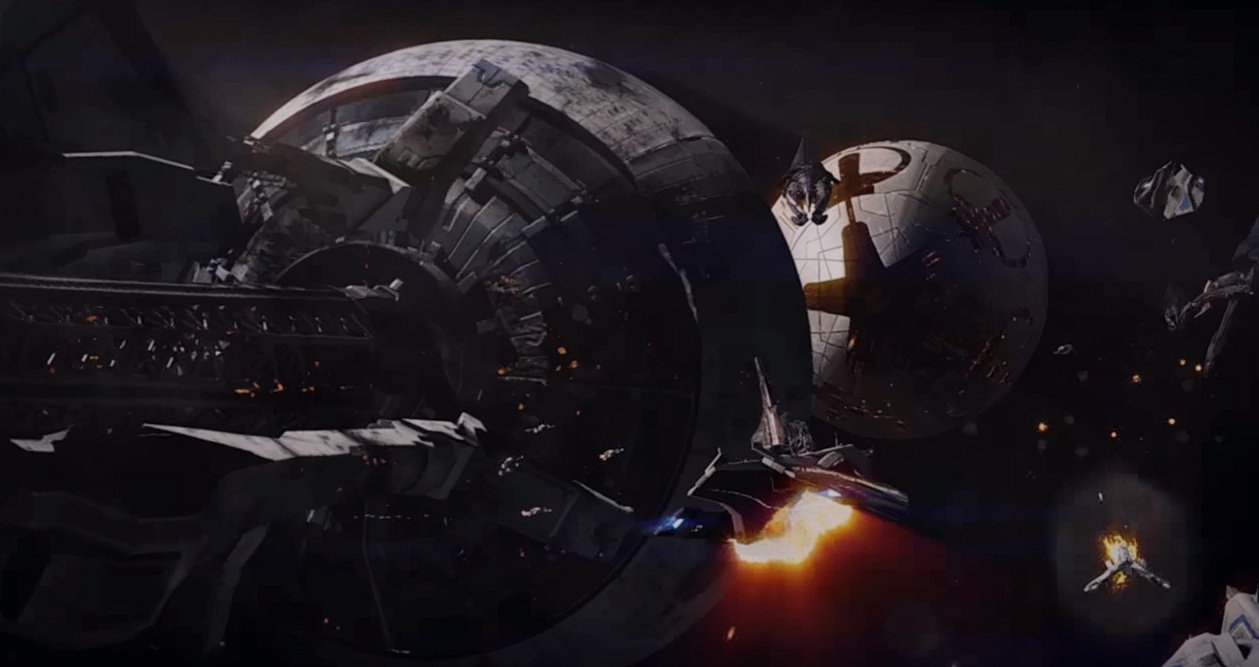 Shield Fleet takes heavy losses while towing the Crucible into position.
The Crucible automatically disengaged itself from the warships towing it, and locked onto the Citadel. After 27 minutes, the device began charging, emitting an eerie red-orange glow. The Crucible fires.
Not knowing the potential power of the weapon, all fleets were forced to disengage from the battle and retreat back to the staging area. The red energy released by the Crucible critically damaged the Citadel itself, but left the Mass Relays largely intact. The wave deactivated all Reapers it came into contact with, sending them careening to the earth. Husks and other indoctrinated infantry were disintegrated on contact, and the Conduit, along with many Reaper structures, collapsed in a heap of rubble. Across the galaxy, Reapers fell to the ground, completely deactivated. The Reaper War was over.