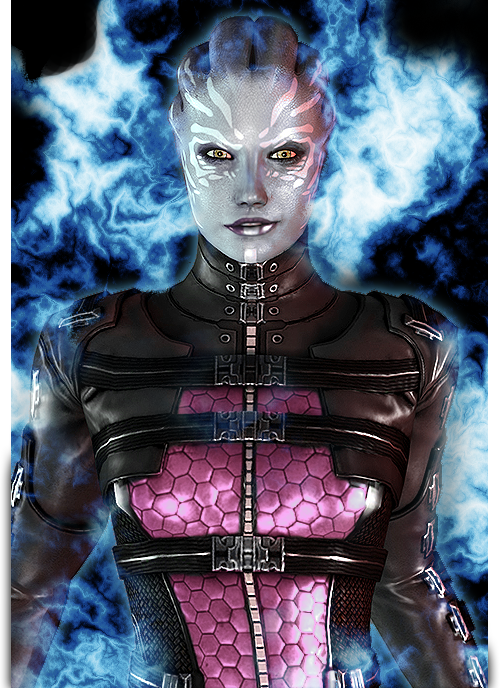 
(This is a Humanized Version of her voice.)

OpC Droko Compor: Decent dude, keeps things organized, isn't a dick like the majority of Batarians I know.  Hope he keeps it up. Well, damn Droko can be a bit of an interesting tale, I can't tell if he's serious or not with half of the things he said, and I gotta hope Kota corrected him on that whole... [EXPLICIT] Subrace. But damn does this guy know how to lead. There's a reason why he's an Operations Chief. Damnit... I witnessed him run after his brother. I was trying to catch up but after the Reactor blew out that pulse, it turned all of us, Miller - Compor and his twin got away, but I couldn't get back... It was rough. I saw his body, he looked at peace... I hope that was true.

Connor Patel: He was just another face in the crowd, but he had the fight in him, he was a decent dude and was ready to spar against our combatants. I... I wish I could of helped, but my injuries? It was too rough. I fucked up my chest bad with all my moving around and straining my body with Biotics, it was an amazement I was running on pure adrenaline and painkillers... I should've saved him.

Anne Elizabeth: A decent fighter and a combat engineer, she's got a good head on her shoulders and is our newest corporal, I hope to see her improve as time goes on. She was just a candle in the wind honestly. She had that spirit inside her, she was a fighter... but... she's gone. I was busy on the defense during that mission. And I was worthless in trying to help. Thatcher looks likes their taking it well... but... I don't think that's the case. I hope you have a good rest.

SvC Arglack: Over the years I've always admired how a Krogan fights. This one's no exception. Though the fact that he was willing to learn from mistakes also helps out a lot. I gotta say, at least he isn't as blunt as most of the Krogans I know. Don't know if that's a good thing or a bad thing. Man, with this first leg in our invasion against Gatol; he proved himself highly, at least he gets what I'm putting down with proving yourself. He's done it on multiple occasions, and even calling that Warlord out got me some respect for him.Poor bastard, I'm pretty sure he's the reason why the Salarian is hiding out right now because of what's happening on Tuchunka. I feel bad... completely bad. I lied to his fucking face about Compor. I told him he was alive, I told him to ignore everything Connie was saying. Everything about people saying he was dead. I lied to his fucking face, and what did I get out of it?

EDI/Connie: Smart-ass, generally a decent A.I, could probably vent all of us out if she wanted too. Least she knows what she's doing.

Chris Kota: Our newest Doc, head doc too. I hope Nguyen doesn't mind getting some help out on the field, she's gonna need it. Took real good care of me too.

Jack Miller: He was in a jail cell the first time I met him, and he's shown is true colors, he doesn't really stop his mouth and fights for what he believes in. I'm pretty sure he got in a spat with Compor because of what happened down on the planet, though I don't know why. He was also serious about making sure the drell got help when they needed it. This, is why I ask people to prove what they're talking about, he's a prime example of it. Everything about what just happened must be rough on him. He witnessed Compor die right in front of him... This entire situation is rough.

During that mission, me and him made a good team... But after we ran into them... Just... I'm sure I lost some respect that day from anyone.

Wilhelm Osbourne: I'm sure he's one of the few reasons that I'm still standing... after... you know what happened.

General Uriel (Uriel Vertanos): A decent man, and was able to hold himself up. He's a great fighter and I can see why so many people have respect for him. But he wanted to show me something, question is what did he want to show me?

Terys D'rosan: She's another Asari, she also is a former huntress, I have to give credit where credit is do. I did that and it was rough, she also has the strength to put up for it. But man she blanks out.

EDIT: And she's gone. No wonder why she only attained the ranking of huntress.

Douglas Boidheach: Commander of our rag-tag group and human spectre. So far a decent guy to work with, especially with his background of roughly fifteen years behind him too.

Staff lieutenant Wolff: Only one I had a conversation with so far, XO of the unit. So far so good.

LCpl Genesis: Even for Geth this ones creepy. I've come to distrust them over the years and this one is no exception. I'm pretty sure the Biotic Kick he served me might've had some oil in it too. Least he's a steady shot.

Nguyen Thi Kim-Ly: Man, didn't think anyone could be as weird as the robot. But here we are. Well, she's not as green as she once was, but she's got her own issues. Poor gal honestly, saw her and the researcher talk to her for a bit, and I hope that went well. Did some online researching and found out she was apart of a... I don't even know what, I can see why  she's got so much of an issue behind her. I Feel sorry for her, her leg got injured badly and got torn off, I hope the new rank she got is giving her some confidence. She's good.

SvC Emma Thatcher: Only time I spoke to her was when we first met, handy close quarters and knows how to handle herself on the field. All I could ask for someone. I actually had the chance to speak with her, she's got a good head on her shoulders and knows what she's doing. Well, so much for a really good head. You know what she could use? She could actually start proving things to me. If she wants to claim she can beat my ass, I want her to actually prove it to me. If you're going to talk shit, put something behind it. Least her leadership skills are good. I don't know how you're feeling... but damnit, I want you to feel better. I need that spirit back on the battlefield, someone else who can prove themselves as a leader.

Doctor Oboro Khada: Bitchy, that's the vibe I get from her. She cares more about her work than other people it looks like, apparently she was on this ship before, like I actually know who she is.

Who the fuck does she think she is, deciding to just ask me quesitons when I wake up about what I saw... she has my helmet cam footage.

Gaila T'Cani: I'm sorry... I let down my sister in arms. You were so close... why I never saved you; I'll never know. I won't let it happen again, not again.

Ashissnia Thanotora: You were that damn last one, why I couldn't save you I'll never know. It was that Phantoms fault... it couldn't be mine, right? No, it was his. His and his alone. Not mine, not yours, not Gailas... it was his.

Sanilra Edoris was an Asari born and raised on Thessia; where she enjoyed a rather traditional life. By the time her own puberty started, her combatant nature was always showing through and her fighting skills were immense - choosing to become an Asari Huntress who fought with her sister-in-arms Gaila T'cani, both of whom were formidable fighters and fierce when it came to combatants of other natures. Sanilra and Gaila were both given Commando status due to their vicious and dedicated strategies, neither of whom wanting to care for spectres, but wished instead for their own people and their own government.

Upon the actions of the Reaper war, Sanilra, Gaila, and a group of huntresses were apart of their own squadron, Gaila given leadership over Sanilra which still calls a sad tone for the Asari to this day. Throughout the Reaper war it was only this group of huntresses with them, and were attempting to be efficient throughout the entirety of the war. However; this did not come without consequences. One by one the majority of Gaila's squad she led fell until it was only three. Sanilra, Gaila, and one final huntress. Their last mission was on Earth, fighting within London to help the current 2nd MSRC brigade, and Shepards Squadron to help take down the crucible, however this ended badly for Sanilra and Gaila and the lone huntress. The huntress slain because of a Cerberus Phantom who sneaked up on the group, Sanilras brutality echoed by Gaila in her final words. Soon after, another Reaper Combatant, one that had two elongated mantis like claws attack and pierce through Gailas body. Sanilra unable to help the battle-sister as she almost tasted death, before the crucible shined out - and the reaper in front of her destroyed, alongside the last person she trusted among the crew.

After this, she was reassigned and given a new task, but nightmares kept on appearing, seeing the Reapers kill her family broke her, and she wanted to find her own family, a new one. Sanilra went to her superiors, and they gave little care to her own plight, this enraged the Biotic as she broke her blade in a furious rage, carrying the hilt out with her as she disgraced her name as a Asari Commando and fled, never to be seen for roughly a year.

There are many biases to what she did during that year, but a prevailing theory is that she tried to find her peace, and that peace was doing the work others wouldn't do, hunting down any former Cerberus operatives whenever she could to avenge her Huntress, and take on anyone else who dared question her and her mercenary work for Gaila. Eventually, in 2226 she joined with the 2nd MSRC - for what purpose remains to be seen.