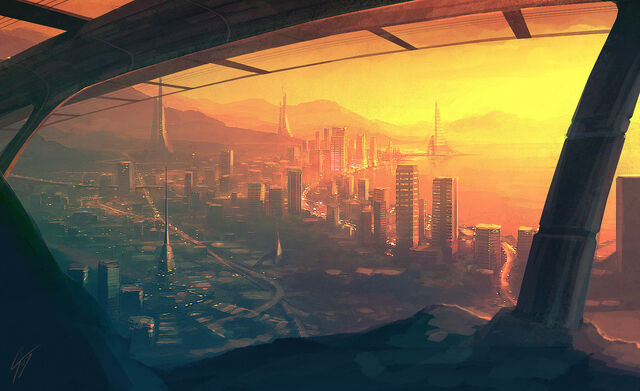 (City of Pon Loak, Heart of the Empire)
<:: Previous description ::>

The raloi are an avian species originating on the planet Turvess, who made first contact with the asari in 2184 after launching their first space telescope and discovering the asari cruiser Azedes in their system.

in 2185 the Citadel Council formally welcomed the raloi to the galactic community. Sold-out Council-sponsored shuttles arrived at Turvess bearing intrigued visitors and gifts of good will during the welcoming ceremonies. At one point the krogan representatives of the Council delegation were ejected from the proceedings after introducing a violent sport called Kowla, which resulted in multiple deaths and injuries. After the conclusion of the ceremonies, a raloi delegation was dispatched to the Citadel for a three-month stay to learn about galactic history, alien biology and culture, and mass effect physics.

In 2186 during the Reaper invasion, the raloi delegation withdrew from the Citadel. Unwilling and unable to fight the Reapers, the raloi decide to isolate themselves on Turvess and destroy any satellites and observation equipment in orbit around their planet. They hope that the Reapers will see them as a pre-spaceflight civilization and spare their planet.

The Raloi have emerged from their homeworld after two decades to rejoin the galactic community. The Raloi, who were thought to be lost after the Reapers erected a exclusion zone around their home system's Mass Relay, have changed dramatically since they last visited the Citadel in 2185. Reports and a interview with Ambassador Ari'ka in 2206 have shed new light into the Raloi's recent struggles back on their Homeworld of Turvess.

The Raloi faced a civil war in the years following the Reaper War. One half, represented the Emperor's Loyalists who saw the decision to destroy their advanced technology and hide themselves from the Reapers was acceptable while others, Namely Shoko(General) Fushan De'ren. has argued that what the Emperor did was rash and cowardly. In a public show of power he defied the Emperor and called for reformation in order to rejoin the fight for their galaxy. The Loyalists and the Reformists engaged in a war for the next decade and a half until the arrival of a Salarian scouting fleet showed that the galaxy had not fallen as Emperor Kay'ble had once predicted.

("Symbol of Unity" Emblem used by the Fushan Reformists)
But the damage to their Empire had been done. The first wave of colonists to leave their homeworld were a majority of Fushan Reformists who went to colonize new worlds outside of their Empire's reach, Where they could contribute more to the Galactic Community than their Emperor could of done. Turvess remains the heart of the Emperor's rule, and his decision has lead to mistrust and disdain from other Citadel Council members. In response. The Imperial Loyalists have chosen to remain rather isolated. And Citadel fleets are not permitted inside the Empire's borders.

At the current moment. It is unclear what will happen to the Raloi's future with this major split wedged in their society. But both ideologies still have Ambassadors on board the Citadel should anything arise.