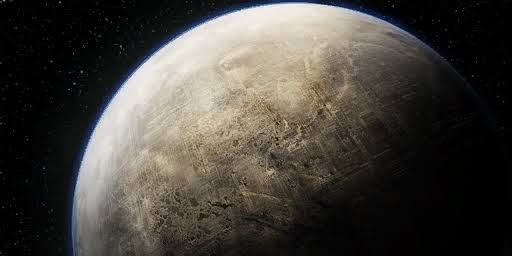 (Rakhana, Former homeworld of the Drell species)
Centuries ago around the time of 1980CE, The Hanar came into contact with the Drell race, who were undergoing a planet-wide catastrophe. The natural resources on the planet of Rakhana went dry after the Drell's rapid industrial expansion. The planet held no resources and it was nigh impossible to sustain a entire species on. The Hanar only managed to save around 375,000 Drell before the planet descended into chaos. Now the planet is bare and is only inhabited by pilgrims, raiders, and undesirables.

In the years following the Reaper War, the Drell faced a crisis. With the casualties sustained during the Reaper War. The Drell were labeled as a endangered species with as little as 125,000 Drell left alive post-war. The Drell have come to terms knowing that to remain on Kahje within a unsuitable ecosystem would eventually lead to their deaths. It is because of this threat that a Council Spectre who served in the war, Arakriel Celembrios, Has resigned from his Spectre position to lead a expedition in the year of 2198. Arakriel Celembrios argued that "Many of our great leaders lie dead from this cataclysm. Most, if not all of us left are simple people, and not scientists or military operatives. It's because of this that I threw down my position as a Galactic Spectre to lead the Drell into a better life. A life where our children will have a homeworld to be born on."

In 2204, Arakriel's luck finally came around with the discovery of a terrestrial planet that closely matched the sort of environment that Rakhana had before it's depletion. A desert/forest like world called KN-1021 in the Pangea Expanse. The Planet was discovered alongside a previously unknown system inside the cluster. This system was shrouded by a area of space that disturupted navigational tools. Making it hard to find the system via probes. Now the Pangea Expanse shares the Refuge System (Home of the Ex-Prothean world of Illos) with the Teslik System. The group inside the system containing KN-1021 only shares it's group with the star, Orius, And two gas giants, Plenko and Tienka. The planet was scouted by Arakriel's Expedition and found the planet to be habitable for Drell standards with a oxygen-nitrogen atmosphere sustained by lush forest continents. (More can be about the planet here((WIP))). In homage to the Hanar species and to their former homeworld. Arakriel named the planet Rakje. 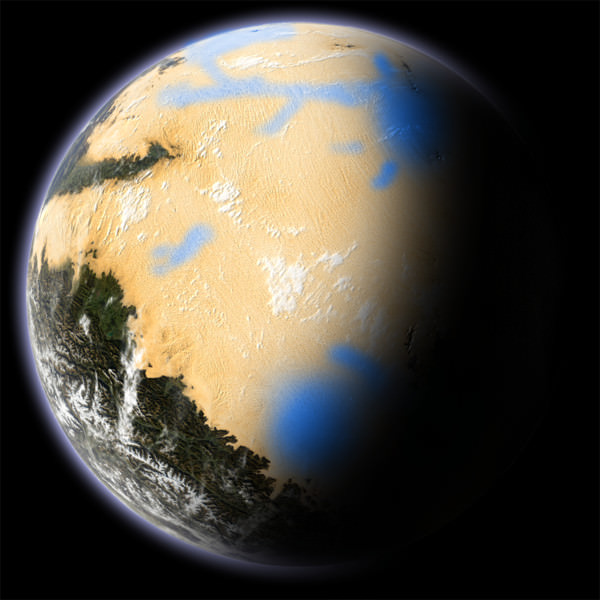 (Rakje, 2226)
However, Arakriel's proclaimation of the planet being the 'new homeworld' is still met with caution. As most Drell feel as though they owe the Hanar a debt for saving their people, causing the population to half itself between respecting the Compact and to those wishing for a new future. The Hanar claim that the Drell are free to leave with the understanding of their situation brought on by the Reaper War, but regardless, many still share the sentiment of repaying a debt, and refuse to leave.

Currently in 2226, Rakje is thriving with two cities, Celom and Verhana, each of which lives in extremes to eachother with Celom residing inside the Oasis-like jungles and Verhana staying to the vast deserts and oceans surrounding it.