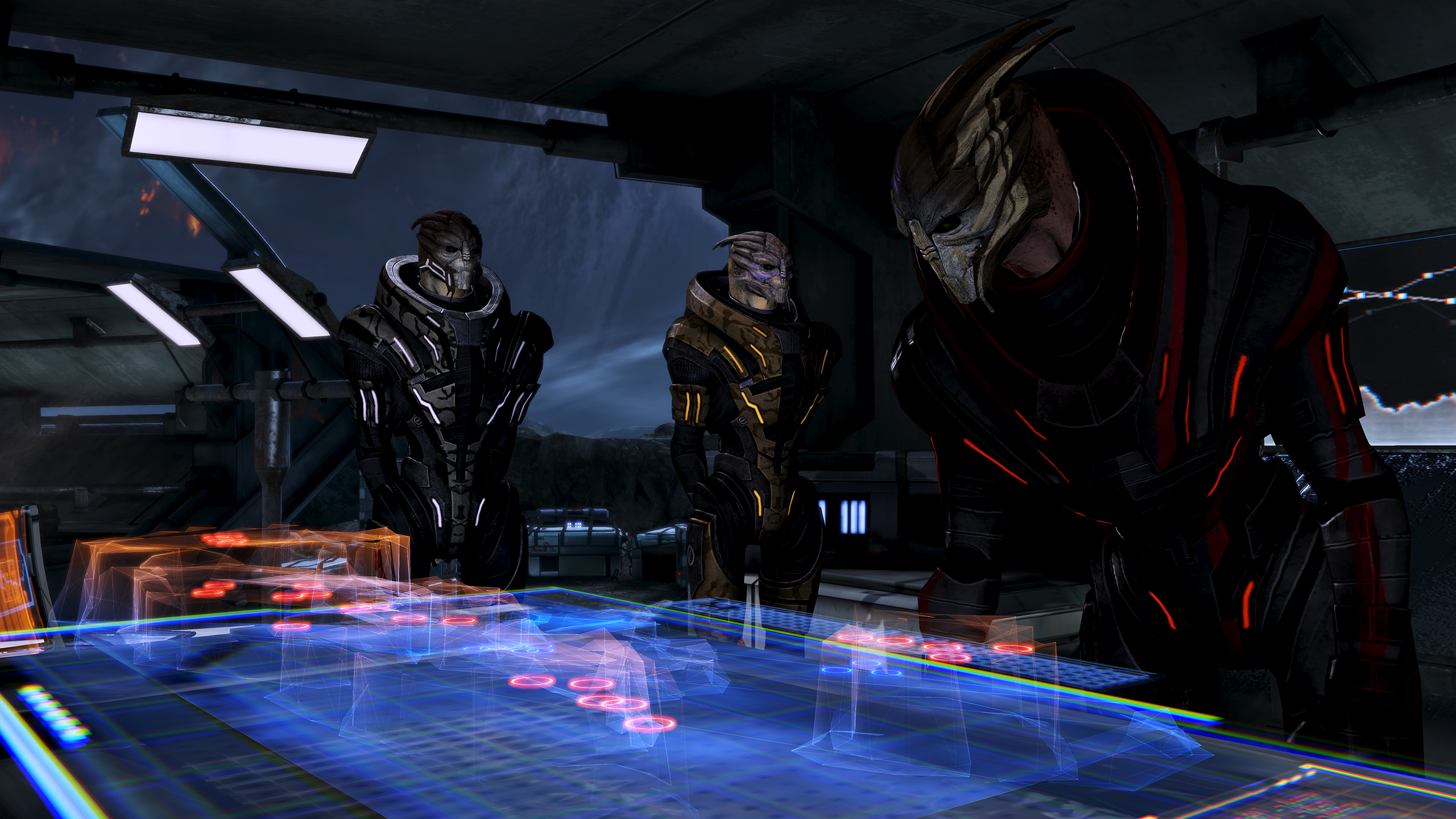 After the Reapers were defeated by the combined forces of the galaxy in the year 2187.  The Reapers were completely wiped out, fading into distant memories as old conflicts within Turian society began to boil up yet again.

(The Birth of the Taetrus Coalition)

In 2194, Taetrus became the spotlight of attention once again since Facinus, a turian separatist group, attacked back in 2185. A event known as the Day of Cross was born after the actions of a Turian soldier left Primarch Victus dead on the stage of a political rally for colony unification. The death caused outrage at a supposed military coup inside the Hierarchy, what followed was all out warfare on Taetrus between the Hierarchy and the newly formed Taetrus Coalition which lead to the Hierarchy’s retreat from Taetrus back to Palavan. This event caused the Hierarchy’s support to drop, caused a massive secession in the outer colonies to join the Coalition, and marked the beginning of the Second Unification War.


(Head of the Taetrus Coalition)

(Patriarch Jocantius Fygon)
However, unlike the events of the first war. The Second War left the Hierarchy defeated and the outer colonies permanently lost from the Hierarchy’s control. A ceasefire was signed on 2212 due to the high-mortality rate in skirmishes going on in Turian space. The Hierarchy and the Coalition pulled their forces back to grow and secure their borders. So far. The Coalition’s leader, Patriarch Jocantius Fygon, has no interest in working with current Primarch Rayol Corinthus who has made several attempts to broker unification. A act which Fygon sees as "-Disrespect to those who were slaughtered by Hierarchy soldiers for opposing their rule all these years now that we've achieved independence."

The Battle of Aephus, 2199 - Years following the split of the Hierarchy. The Taetrus Coalition launched a surprise attack by leading a resistance-born ground assault on a Hierarchy installation on Aephus which prompted a Hierarchy Naval force to be dispatched from Palavan. However, which the force arrived to Aephus, they fell straight into the Coalition’s trap. Using FTL propelled ships from Aephus, the Coalition sent these ships into the flagships of the fleet, causing near instant destruction. This was followed up with a small fleet jumping to Aephus to wipe out those who wouldn’t retreat. This was the first major attack of the Coalition and its first major victory. The Hierarchy regards this attack as barbaric by military standards.

The Siege of Pheiros, 2203 - It was during this time that the Coalition mounted a 2nd major attack since succeeding and failing in dozens of other attacks. They wanted to control Pheiros’ military station to cut off the major source of fuel for the Hierarchy and cause a damaging blow to their economic and military resources. However, It was by the actions of Captain Augustus Vakarian that led to the successful defense of Pheiros and her soldiers. Captain Vakarian took command of the garrison after it's Commander died and directed his men to use the station’s own fuel reserves to send a fire-ship into the heart of the Coalition’s fleet and detonate the ship to wipe out half of the attacking force. This led to the Coalition’s retreat and victory on Pheiros. Captain Vakarian is regarded as a hero for his actions in saving his men and the station.

Battle at the Sea of Blood (Battle of Triginta Petra), 2210 - The citizens of Triginta Petra have always had a tough life since its colonization. Nearly dying off due to the Reaper’s actions of nuking their main source of food. The citizens of Petra survived and managed to flourish following the years of peace after the war. It’s regarded as a fresh take on Turian culture due to the changes in way of life on the desert world. However, it did not spare the locals from the battle that transpired in 2210. A major battle ensued between a fleet of both Hierarchy and Coalition troops. The battle left both sides in defeat as both of the fleets crashed on Petra. Those who survived took the fight to the enemy, causing a long and bloody skirmish on the backwater world. By the end of the conflict, only so few remained. The blood spilt on that day earned the title “Sea of Blood” in the history books due to the purple blood-caked sand. It was considered a ‘victory’ for the Coalition.