We Are Something More

We Are Something More

"The Lesser believes that this cycle is different, The Elder has spoken so." Within the deep, black depths of the sea, two massive, titanic creatures lurk, Nearing over 3200 meters below the sea level. One, marked with yellowish pigments upon bony flesh. Lays against a ancient rock formation in the darkness. Another, blueish in tint, quietly hovers over the smaller, yellowish one like a mother watching a child. "The Lesser has destroyed one of them before." The giant, blueish titan turns away from the yellowish-tinted one and stares out into the darkness of the ocean depths. It's gigantic eyes being the only illumination. "The Elder believes it was not by chance either. For the one called 'Harbinger', the Firstborn, believes the Lesser is a threat as well." The blueish titan turns towards the yellowish one again. "The Intelligence has ignored a fault in it's directive. And now it perceives it as a threat?" The yellowish titan rumbles the very ocean as bubbles began to escape from glands on it's back. "The Arthenn, The Inusannon, The Protheans. None of the Lesser races ever succeeded in destroying one of it's 'Reapers'. Except for the Lesser one that calls itself, "Shepard."". The blueish tinted titan releases a bundle of bubbles from underneath it as it keeps itself afloat. "Then The Elder has decided then, Our time of isolation is over. Shozho." The yellowish titan, Shozho. slowly lifts itself from it's bed as the other speaks. "Come. We must prepare for the Departure." The two titans, Shozho and the unknown, blueish titan. Slowly dive into the deep, dark, unknown. Nearing 8500 meters under the sea.

Shozho and the other titan come to a rest. Although nearly pitch black at this depth of the sea, light still emits from the eyes on the titans, as well as what appears to be a crater, dug deep into the side of what appears to be a underwater mountain formation. Large, and ancient looking technology lays deep inside the crater, ever slightly glowing. Shozho, slowly and nearly gracefully reached in with it's massive tentacle, causing thousands of deepsea fish and critters to quickly exit the mountainous cave. Shozho carefully scooped the technology up with it's arm and scooted it towards the edge of the cave. The devices, upon being visible by their illuminated eyes, appeared to be harnesses of some sort for some massive creatures. "They will serve our needs." remarked the blueish titan. The titan slowly turned itself around slowly to face the black depths of the ocean while Shozho scooped up one of the massive pieces of technology. In a painfully slow process. Shozho slowly attached the harness to pieces of it's body, the technology itself seemed to drill into parts of the Titan's bony body structure before it fasten and secured itself with what can be assumed was a magnetic, mass effect field generating from a core on the back end of the Titan. The blueish titan then turned around and assisted Shozho in equipping it's own massive harness to it's back.


Once the two were done, the titans glow outlined themselves to look eerily similar to the Reapers, with lines of lights running down their frontside, with two, large, engine looking objects attached to their under carriage. A deafening hum, which was load enough to kill any lesser being under the sea, began to ring from the titans as their equipment flashed to life, along with what appeared to be cybernetic lines hidden deep under their skin. The two titans then released a gust of air powerful enough to disturb the nearby rock formations. The two ascended towards the surface.


Upon breaching the surface, the two paused and stared towards the skies above. Out towards space, they dwarfed the nearby structures in size, looking as if two islands broke from the sea and rose into position. Using their cybernetics. They produced a mass effect field to lift the fragments they had on the surface. the smaller one, Shozho, only took two of the fragments, while the larger one took nearly six. They both then slowly raised themselves towards the sky as their mass effect generators creating a barrier around them, instantly destroying the nearby floating structures and parts of the crags that peeked up from the sea. They both stared at eachother for a long while before one spoke, "We will not hide any longer from those that are our tools. The Lesser species will pay tribute to us. But the Reapers, they will pay their part. In blood." Shozho concluded to the statement made by the other. "Subjugate well, Vraorin." The two then decimated the surrounding seawater and blasted it apart as their generators lifted them towards space, causing a massive shockwave.


The two slowly separated from eachother, each parting to their own ways. Vraorin, the blueish titan. Slowly changed it's course to the nearby mass effect relay. Once the Leviathan reached the relay. It's course was set. It's generators charged and it's mass effect field reinforced itself to help the Leviathan travel towards it's destination. The Sol System.

Re: We Are Something More

The Reapers spread far and thin inside of the already invaded Sol System. Earth, Mars, Juniper, and Saturn have fallen, and the stations past Neptune have already evacuated. Leaving the Reapers behind to destroy the colonies and stations left. However. One of the smaller Sovereign-Class reapers has been tasked with destroying the colony that rests on the icecaps of Enceladus, One of Saturn's moons. 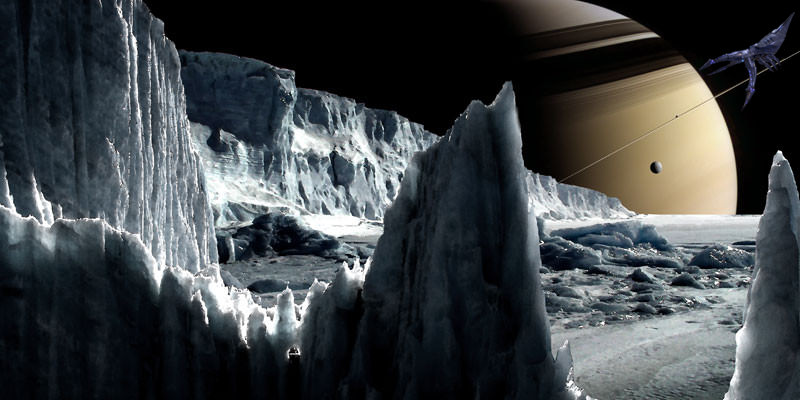 The Sovereign-class wastes no time trying to harvest the small colony, With many shuttles already starting to depart, It hastens it's descent down on the moon. Firing multiple lasers at once to try and destroy the parting shuttles. Out of the cluster of thirteen that escaped, only five make it out. They retreat from the moon and leave the Sovereign class behind to land on the ice moon and start it's destruction of the facility.

But suddenly, a bellowing voice broke through the emptiness of the moon's atmosphere, "You, are mine."

Before the Sovereign-class could react, A pulse of energy struck it's systems and disabled it's link to the Reaper communication line. Leaving the intelligence to fend for itself. The massive beast slowly turned itself around to face a titanic Leviathan diving towards the Reaper. In a wondrous splash the massive Leviathan tackled the Reaper and ripped it's lasers off with immense force. The two titans sunk into the icy sea below Enceladus' surface. The Reaper sounded it's horn underwater, causing a massive vibration throughout the hidden sea. The Leviathan, Vraorin. Began to use it's 'mouth' to rip into the front side of the Reaper's armor while it's tentacles reached around and restrained the machine's legs using it's powerful biotics. The Reaper was totally helpless, without it's weapons and with the Leviathan on top of it. It could only struggle and try to turn while the two of them slowly sank towards the bottom of the Icy sea.

The two disappeared below into the darkness of frozen depths. A large explosion erupted deep within as the Leviathan' tore into the core of the sovereign-class. Parts of the reaper slowly floated while others sank to the seabed. Six eyes glowed at the bottom of the sea. Illuminating it's surroundings.

"We will reclaim what we have lost."

The voice fell silent. And the glow of the Leviathan's eyes subsided deep within the moon's sea, soon, only silence and a deep rumble was heard. 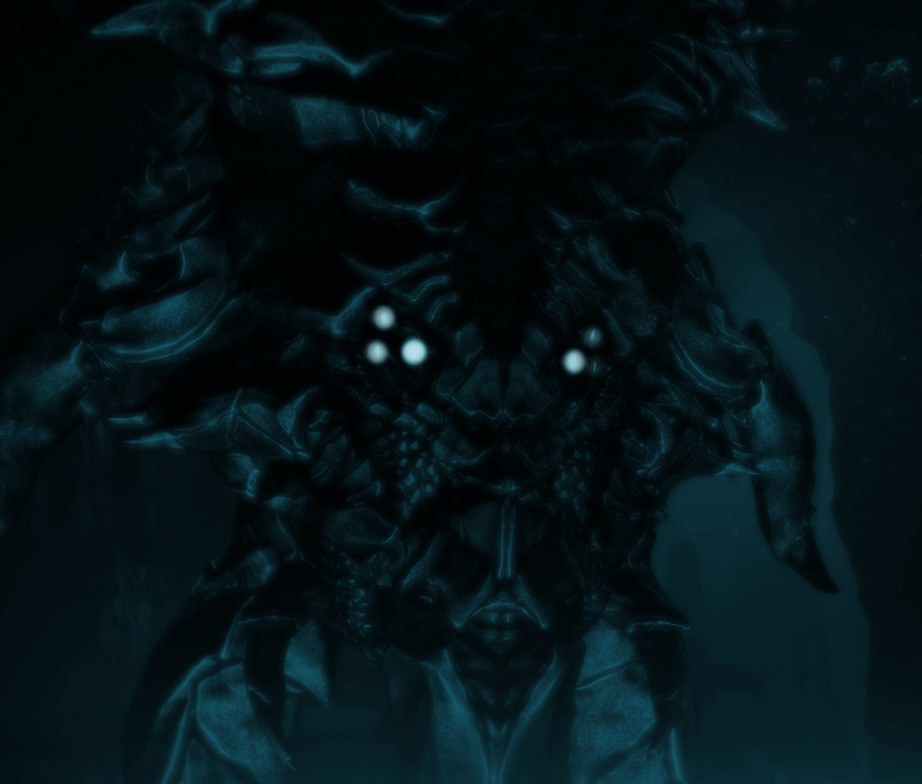